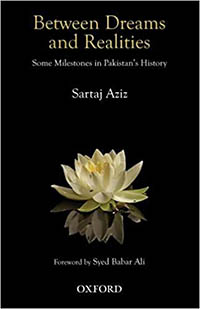 How should one explain the central theme of former parliamentarian Sartaj Aziz’s memoir, Between Dreams and Realities: Some Milestones in Pakistan’s History, under one organizing principle? At the risk of being selective, one can say the book is about ensuring a state’s economic resource and diplomatic and military strategies are suited to each other. Since Pakistan’s diplomacy is notoriously subordinated to its military strategy, one can also say that our military strategy has let the country down. Whether or not this can easily be posited as a defining aphorism is a question for the reader to decide.

Sitting in the Planning Commission of Pakistan in 1964, economist Sartaj Aziz was made uncomfortably aware of the policy-economy mismatch. Zulfikar Ali Bhutto, the dashing foreign minister of Ayub Khan, had gone on a populist anti-India and anti-U.S. binge, spellbinding the ruling general into thinking he was becoming a world statesman fawned upon by enemies of the U.S.—until Saeed Hasan, the deputy chairman of the Planning Commission, told the old dictator: “Sir, I hope you realize that our foreign policy and our economic requirements are not fully consistent, in fact they are rapidly falling out of line.” Pakistan lost around half a billion dollars it had coming from the Aid-to-Pakistan Consortium.

Consider the economic fallout of the 1965 war when two days before India’s full-scale attack on Lahore, Bhutto made a categorical statement in the cabinet that Islamabad’s incursion into India-held Kashmir, at Akhnoor, would not provide Delhi with any justification for attacking Pakistan across the international boundary “because Kashmir was a disputed territory.” After that Pakistan floundered, losing East Pakistan six years later, with the economy in great jeopardy without U.S. assistance. Bhutto’s subsequent nationalization failed to make up for the ‘mismatch’ between economic reality and policy formulation.

There is hubris in both quarters, civil and military, a kind of over-reaching and ‘excess’ that has been punished by the gods since the Greeks tried to understand it. “Nawaz Sharif’s unprecedented victory in general elections or ‘the heavy mandate,’ as the media repeatedly emphasized in 1997, had probably changed his political mindset forever,” says Aziz. This electoral win was followed by many acts of excess; the firing of the Army chief, the firing of the president, and the well-publicized assault on the Supreme Court. It began very early: President Leghari’s address to the joint session of Parliament on March 26, 2007 aroused undue misgivings because his text was not the one sent to him by the government.

In July 1997, Sharif thought he would create his own special courts to unrealistically deliver justice to the poor man’s doorstep. Even loyal PMLN members, like Syed Ghous Ali Shah, warned that this proposal could lead to confrontation with the judiciary, writes Aziz. But Mian Sahib had his heavy mandate and his disposition of excess. Soon Justice Sajjad Ali Shah was similarly aroused, through a kind of judicial hubris that is still around. He admitted a petition challenging Mian Sahib’s 14th Amendment against parliamentarians voting against the wishes of their party leadership, and suspended it.

Within nine months, Mian Sahib was facing contempt at the Supreme Court, and the Parliament dominated by his party hurriedly amended the Contempt of Court Act to save him from going under. The book is terse on the ‘assault’: “Some [PML workers] were apprehensive that if the Supreme Court was allowed to conduct its business, the prime minister would be convicted. As a result he would also lose the political battle. They therefore resorted to violence to disrupt the court proceedings. The chief justice and other members of the Bench left the court and went to their chamber to mark one of the most disgraceful episodes in the judicial history of Pakistan.”

Aziz examined the case later with his PML colleagues and came to the conclusion that “the decision of Nawaz Sharif to set up a separate judicial system for trying cases involving terrorism” was the mistake that triggered the judicial crisis.

It is the nuclear test of 1998 where perhaps Sartaj Aziz briefly abandons his theory of matching economic requirements with national strategy. He approved of the test because Pakistan’s “deepening economic imbalance will bring about a decisive shift in the balance of power between India and Pakistan” and the idea was to recreate balance through deterrence. He says he was upset about what happened to the economy after the test, but was consoled when, in 2002, India mobilized half a million troops on the border after an attack on its parliament in 2001, but had to withdraw “due to the danger of a nuclear retaliation by Pakistan.”

Was Sartaj Aziz unaware that the Indian Parliament had been attacked by “non-state actors” from Pakistan? Was deterrence to mean also the freedom to attack with non-state actors below the nuclear threshold? As will become clear later when Sartaj Aziz confronts the Kargil crisis as foreign minister, he may not have been “in the loop” on the non-state actors and was therefore looking at the Indian mobilization of 2001 the way he did. True to mettle, as foreign minister in 1999, he presented to the cabinet his final articulation of the theory of the “disconnect” between military strategy and civilian policy.

Aziz was intensely aware of the continuous hubris of Mian Sahib’s actions as they unfolded. He says: “Others will blame Nawaz Sharif for many mistakes he made. But in my view, the most serious of these mistakes was Nawaz Sharif’s decision to remove General Jehangir Karamat as chief of army staff in October 1998.” Then he says: “I was almost certain the position [of Army chief] would go to General All Kuli Khan the chief of general staff and a very competent officer, next in seniority to General Jehangir Karamat. But Nawaz Sharif decided, in consultation with Shahbaz Sharif and Chaudhry Nisar Ali Khan, to appoint General Pervez Musharraf as the next army chief.”

Then comes the murky stuff that Mian Sahib’s darbar was subject to. Sartaj Aziz says: “The day after General Pervez Musharraf was appointed as Army chief I suggested to Nawaz Sharif that he might appoint General Ali Kuli Khan as CJCSC to redress the injustice done to him. He seemed quite receptive and said, he would think about it.” Then came the bolt from the blue: his advice was not heeded because, as Shahbaz Sharif told him, General Karamat had revealed that he was “under great pressure from colleagues like General Ali Kuli Khan to take over rather than resign.” Later Karamat denied to Sartaj Aziz that he had ever said this.

Sartaj concludes: “As I reflected on this unfortunate chain of events after the military takeover in October 1999, I came to the conclusion that in removing General Jehangir Karamat, Nawaz Sharif had committed a blunder. He also failed to recognize that despite his heavy mandate, it was not advisable for him to dismiss two Army chiefs in less than a year. In doing so he had overplayed his hands and effectively derailed the democratic process for nine long years.”

Sartaj Aziz was removed as finance minister and made foreign minister in 1998. He mused: “Operation Gibraltar and the subsequent war in 1965 were the first major foreign policy disasters brought about by a military government in Pakistan.” The U.S. had already withdrawn economic assistance. “It is unthinkable that any group of competent military strategists would launch such an unrealistic operation in the face of these realities and on the assumption that India could not attack the international boundary,” he writes. Then he presents the thesis of the book: “I wondered if we were facing a similar disconnect in our security needs and economic realities once again in the late 1990s.”

Out of the loop

When the Taliban attacked Mazar-e-Sharif in 1998, the second time around, killing and raping at a grand scale, non-state actors of Sipah-e-Sahaba also killed 11 Iranian diplomats in the Afghan city. Sartaj Aziz, as foreign minister, must have been privy to the fact that our Afghan policy was run by the Army through the ISI, but he gives the impression that he was not in the loop about the Sipah-e-Sahaba boys killing the Iranians. Even so, he hints at this “flaw” in his “proposals” about how to coordinate Army and civilian thinking through an “interactive” system. But the Foreign Office remained little more than “post office” in 2009.

India came to heel, so to speak, after the 1998 test. Vajpayee was in Lahore and Mian Sahib had normalization on his mind with a schizoid state in the background attacking India across Kargil. Sartaj proposed Shaharyar Mohammed Khan for back-channel diplomacy, but Foreign Secretary Shamshad Ahmad persuaded Nawaz Sharif to nominate Niaz A. Naik instead. Every time Mian Sahib rebuffs Sartaj he is proved wrong by events. Why does he do it? The answer may be his distrust of the rational mind and preference for loyalty rather than sincerity.

Living with a tactical army

In May 1999, General Musharraf briefed the prime minister on Kargil. This may not have been the first briefing on the matter, but it was the first Aziz attended. The P.M. was accompanied by him, Abdul Majid Malik (minister for Kashmir affairs), Raja Zafarul Haq (minister for religious affairs), Shamshad Ahmad (foreign secretary), and Tariq Fatemi (additional secretary in the P.M. secretariat). Sartaj Aziz was among the dissenters, and what he said must be flagged as the intellectual thesis of the book, that the Pakistan Army is “tactical” rather than “strategic” in its thinking.

He said: “I see that the tactics are brilliant but the strategy does not seem viable. And the objectives of the operation are even less clear.” Other Foreign Office diplomats were perhaps in the loop, unlike Sartaj. In the RAW telephone intercept of General Musharraf—and there have been many since—General Aziz in Islamabad is heard telling the chief in Beijing in Appendix III of the book that while Mian Sahib was okay, “Shamshad as usual was supporting.”