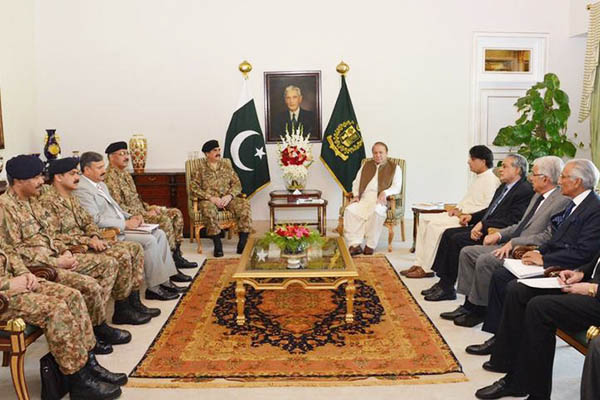 A high-level meeting in Islamabad speaks volumes about civil-military relations in Pakistan.

A picture, they say, is worth a thousand words. It’s a cliché, for sure, but like all clichés, remove the dust of abuse and it becomes poignant.

In Brussels, in the Royal Museum of Fine Arts, lies a painting, Landscape with the Fall of Icarus, thought to have been done by Dutch painter Pieter Brueghel. It captures the myth of Icarus’ flight and fall in ways that compelled W. H. Auden to compose a poem, Musée des Beaux Arts, stating that About suffering they were never wrong, / The old Masters…”

There’s profundity in those words. They are as descriptive of complexity as the painting they set out to describe, the stuff high tragedy was made of. That era is long gone. But let’s not lament its passing because it was, to quote Huxley, not the whole truth, but selective. The whole truth can be tragicomic and sometimes even farcical.

Consider the above picture. What do you see? Certainly not Icarus’ fall; most definitely not anything that Ovid or Homer might have penned or a master painted. It is a photograph, taken with one of those commercially available high-pixel cameras we use today. There are gentlemen here in uniform and there are other gents in mufti. It’s a high-level meeting, which means the high and mighty of the country are seated here, discussing matters of state because, as we know, state matters.

But while they are all high and mighty for the onlooker, there are some in that room higher and mightier than others. If there’s any meaning to this photograph, it is this basic fact.

But let’s move on. We see the prime minister seated there. He is the chief executive. There are three federal ministers. There’s the Army chief, who is one of the three service chiefs, not the Commander-in-Chief. At most, therefore, primus inter pares. There’s a man in mufti seated with the men in uniform. But he is actually one of them, a lieutenant-general, who heads the Inter-Services Intelligence Directorate. And then there are some other generals, seated vis-à-vis the civilians.

So, if no one is falling here, like Icarus, what’s the big deal? Except, that the photograph depicts in a way that nothing does, or could, the reality of power in this country. It’s not about people falling. It’s about the fallen—and, conquered.

There’s the de jure. Let’s begin with that. Almost everyone on the civilian side, as per legal protocol, is senior to everyone in uniform. The three federal ministers, one of whom is also the defense minister, are all senior to the Army chief. Ditto for the prime minister’s adviser on foreign affairs. The foreign secretary too is senior to the Army chief, who is subordinate to the defense secretary. And yet, the Army chief sits along with the prime minister and surveys the scene with his own ‘boss’—remember, we are still on de jure—the defense minister, sitting in front of him like a courtier.

De jure, then, there’s everything wrong with this photograph. But the legal-normative is different from the reality, the de facto. How Latin comes to our rescue in such situations. Its robes adorn a body afflicted with disease. You might also call it the picture in the cellar, the rotting picture of Dorian Gray while Mr. Gray looks eternally young and dashing.

I wrote about the police and the lawyers breaking the law to mend it. They were being violent. But it seems that for breaking the legal-normative, one doesn’t have to be overtly violent. The implied threat of it can work as effectively, perhaps even more.

Take agency theory. It talks about the first and second orders of agency. The first is the power we give to our representatives to rule on our behalf. The second is given to the functionaries of the state by our representatives and, therefore, is also called administrative agency. When the second-order agents violate the first order of agency, they argue that they are violating it because there is a breakdown in the first and they have to flout the second order of agency in order to rectify the first.

Now, revisit lawyers flouting the law while demanding justice in and through the law. The modus operandi is different but the argument is essentially the same.

Some will argue that we shouldn’t nitpick because protocol or not if the civilian and military leadership are agreed on how to steer the state out of this mess then we could take a break on the idea of civilian supremacy. Perhaps. I could invoke Mao Tse-tung’s On Contradiction and ask where the principal contradiction lies. Is it about civil-military relations or is it about our fight against obscurantism.

I will grant that. But there are two issues, nonetheless. One, even if the civil-military contradiction has been relegated to being the secondary contradiction, it hasn’t gone away and, therefore, must be talked about. Two, if the current mess in which we find ourselves can be traced back to the men in uniform then we need to be sure that the recipes they are offering today are actually different from what has been their staple thought.

Finally, though not least, while we will be asked to postpone discussion on protocol and that which lies in the domain of law and the Constitution, the Army, it seems, while fighting the internal threats remains cognizant of its own primacy and the retention of its position at the head of the high table. So help us Lord!

And hence Pakistan is a banana republic.

It is because of the army of this ‘banana republic’ that you are able to sit comfortably in your home to type criticism about the “hakim” afwaaj-e-Pakistan.

A good observation made.