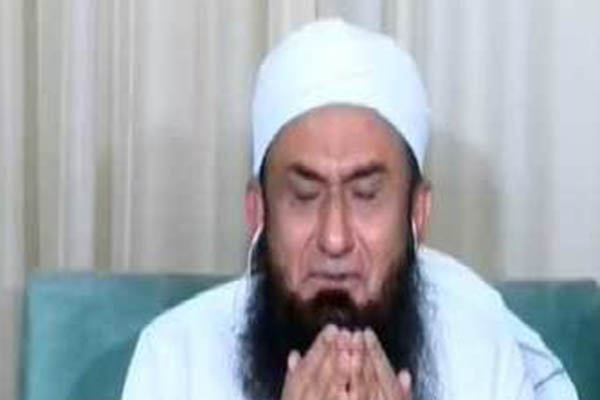 Following massive social media backlash over a nationally televised prayer in which he linked the coronavirus outbreak sweeping Pakistan to alleged ‘indecency’ of society and the actions of young women, Maulana Tariq Jameel on Monday night issued a clarification for his “hurtful comments.”

“My aim [in the prayer] was to point out that WE are all to blame for our current state,” he said in a posting on Twitter. “It was meant to be a general remark not targeting any specific men, women, persons or gender, but as a reminder to get closer to what Allah teaches us,” he added.

“My goal was to remind us all to focus on the spiritual and away from our desires and the materialistic. I am the first to admit, as I have taught over the years, that there is no excuse for making any hurtful comments about anyone or making anyone feel uncomfortable,” he said, adding, “For which I sincerely apologize to anyone who may been inadvertently hurt. I pray that Allah accept our good deeds and forgive our shortcomings.”

Jamil mostly tweets in Urdu, while this clarification was issued in English. He had earlier posted another clarification, in Urdu, apologizing for targeting the media in the same prayer, claiming his intent was not to target any single profession. “If anyone was hurt by my statements, I wholeheartedly apologize to them,” he had added.

On April 23, Jameel was invited to say a prayer during Prime Minister Imran Khan’s Ehsaas Telethon, which was simultaneously broadcast on both public and private TV channels in a bid to secure donations for the impoverished feeling the brunt of the economic impact of coronavirus-induced movement restrictions.

In a prayer that spanned almost 15 minutes, Jameel claimed society’s goal should not be to fight the coronavirus, but to treat it and humble oneself before Allah. He then appeared to blame the pandemic on the ‘indecency’ of women and youth and dishonesty and fraud.

“Who has torn honor to pieces in my country? Who makes my country’s daughters dance? Who is asking them to wear skimpy clothing? Whom should I hold accountable for this sin?” he said, adding: “When a Muslim’s daughter choose the path of indecency and the youth choose vulgarity … the biggest curse of God was on the people of Lut [Sodom] because they crossed all boundaries of indecency.”

He also accused the country’s colleges and universities, especially privately run institutions, for making people stray from religion. This belief is not too far from Prime Minister Imran Khan’s own views; he has repeatedly claimed Pakistan’s private schools are ‘erasing’ Pakistani culture among the youth.

Jameel’s words had attracted a lot of scorn on social media, with people demanding he apologize to women for blaming them for the ongoing pandemic. The media, too, demanded he apologize for alleging it was a profession of liars.

In addition to the offended citizenry, several lawmakers also demanded Jameel apologize, including Human Rights Minister Shireen Mazari, who said such thinking was ‘absurd’ and unacceptable.