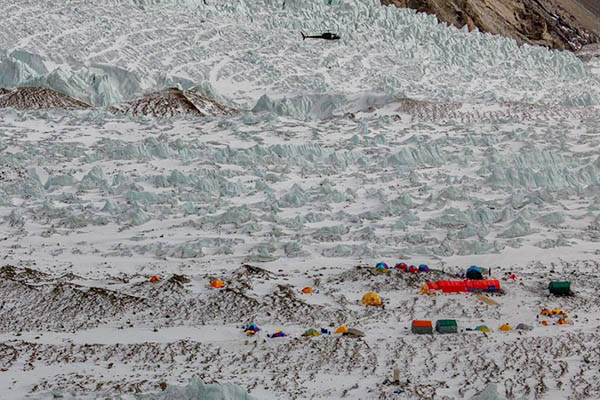 Russian-Polish climber Denis Urubko has paused in his “suicidal” attempt to summit K2 alone during winter, a spokesperson said on Monday, following a high-altitude weekend drama that saw him go it alone.

Urubko, 44, was part of a team of Polish mountaineers attempting to be the first to scale the world’s second highest peak in winter. But he broke away from the group on Saturday after a series of disagreements, sparking fears for his safety on one of the world’s most dangerous climbs.

“Denis Urubko goes down. He is currently in C2,” tweeted the spokesman for the Polish expedition of which Urubko was previously part, Michal Leksinski.

Camp Two is one of four camps, including base camp, that come before the push for the summit. It is where Urubko made his abrupt decision on Saturday to climb the 8,611-meter mountain—widely said to be more challenging than Everest—without the aid of porters and in defiance of the rest of his team.

Leksinski gave no other details and it was not clear whether the return to Camp Two meant Urubko had abandoned his solo attempt.

Fellow mountaineers have expressed concern at any such attempt. “A solo attempt of K2 in winter is completely suicidal,” said Pakistani climber Mirza Ali.

Karim Shah, an experienced mountaineer and friend of Urubko, has described such an attempt as “very risky.”

Urubko had become increasingly frustrated with the Polish team’s pace after a series of delays, including the daring night-time rescue of French mountaineer Elisabeth Revol on another Pakistani mountain, Nanga Parbat, in January.

Urubko had volunteered to go to Nanga Parbat as part of that rescue team. But K2 expert Rehmat Ullah Baig said the mission forced the Poles to readjust their initial plans and choose a new route, a move that Urubko was said to be unhappy with. He left his team members behind on Saturday. “He was trying to persuade the team to push for the summit in February,” a porter accompanying the group told AFP, adding Urubko argued that waiting until March would make a summit difficult. “He has had a heated debate with the team leader and left for the summit without saying a word,” the porter added on condition of anonymity.

The Polish team confirmed the incident, saying Urubko left Camp Two without a radio after refusing to speak to the expedition’s leader.

Baig said Urubko’s solo attempt was poorly planned. “There are no ropes fixed or trails charted out and Denis cannot do it alone: he needs at least three to four people for that,” said Baig, who climbed K2 in 2014.

Leksinski told AFP that for the rest of the Polish team, some of whom are in base camp and some at Camp Two, “the expedition is going according to the plan.”