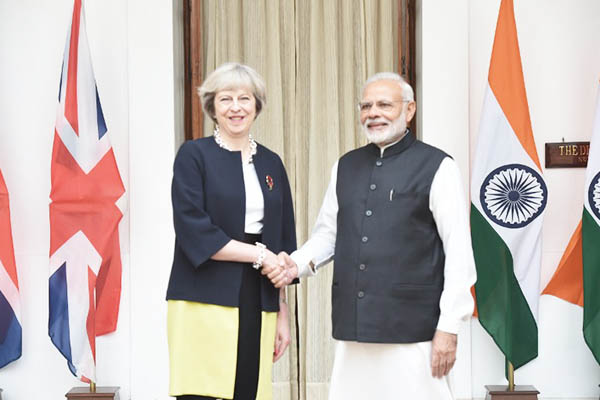 Prime Minister Theresa May said Britain would become the ultimate free trade champion as she laid the groundwork Monday for a potential post-Brexit deal with India, the world’s fastest growing major economy.

In her first bilateral trip outside Europe since taking office in July, May said Britain would not “turn its back on the world” once it has left the E.U. but wanted new economic relationships that would benefit all sides. “We want Britain to become the most committed and most passionate advocate of free trade in the world,” May said in a speech to industrialists in the Indian capital. “That is because free trade creates a rising tide that lifts all boats, it makes all richer, it creates jobs, it increases investment, it improves productivity, it transforms living standards and creates opportunities for all our citizens.”

Accompanied by a delegation of around three-dozen business leaders, May arrived in the smog-bound capital New Delhi late Sunday and will travel to the southern tech hub of Bangalore on Tuesday. Although Britain cannot sign any bilateral trade deals until it has left the European Union—most likely in 2019—May’s visit is seen as signaling a desire to get the ball rolling as early as possible.

Liam Fox, in charge of a new department for international trade, is traveling with her and due to hold detailed talks with his Indian opposite number Nirmala Sitharaman on Monday. May said that “no country owes another country a living” but there were plenty of areas where Britain and India could work more closely together. “Identifying … [areas of common interest] does not need to wait for us to leave the European Union.”

While the benefits of a deal to Britain are evident, sealing one will be no easy task in a country which has been negotiating with the E.U. as a whole on a free trade agreement for the best part of a decade.

India still has a rigorous regime of tariffs and red tape, which have traditionally made it one of the most complex places to do business, even if the potential market is huge. Britain’s need to cut deals quickly once it leaves the E.U. gives Modi’s government added bargaining power.

The Hindustan Times wrote on Monday with Britain’s looming departure from the E.U., “the U.K. needs trade with India more than ever.”

Despite their historical ties from the colonial era, bilateral trade is relatively low at $14 billion last year—smaller than the volume of trade between India and Germany.

Indian Prime Minister Narendra Modi, who is due to hold talks with May later in the day, said the two governments faced similar challenges. “It is vital that India and the United Kingdom, two countries linked by history, work together to define the knowledge economy of the 21st century,” Modi said. “In the current global environment, our two countries face several economic challenges which directly affect trade and commerce. But I am confident that together we can leverage our scientific strengths and technological prowess to create new opportunities.”

There is particular unhappiness in Delhi over visa restrictions on students wanting to stay on in Britain after completing university courses which have led to a 50 percent drop in Indians enrolling.

Anger at levels of immigration from both inside and outside Europe were seen as a crucial factor in the outcome of the June referendum when British voters opted to pull out of the E.U. May however said Britain already gave Indian citizens special status by letting them apply for same-day visas and planned a new “registered travelers fee” allowing travellers to be fast-tracked through customs. “It’s crucial that those people who need to travel between our two countries can do so,” she added.

The governments are also expected to sign an agreement during the visit on intellectual property and launch a partnership to help India develop “smart cities,” which are designed to be models of urban planning—one of Modi’s pet projects.