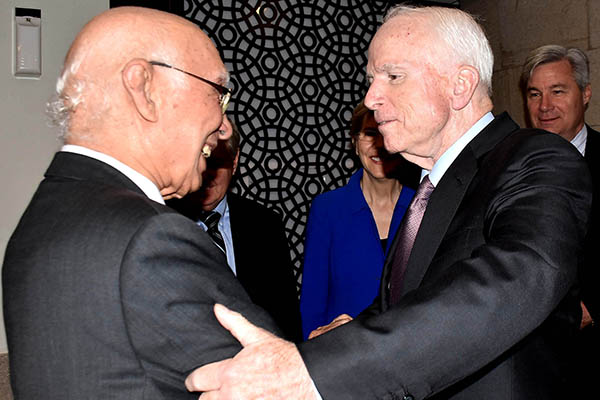 U.S. senator described engagement with Islamabad as ‘important’ to ending militancy in region

The relationship between the U.S. and Pakistan has been strained at times with some in Washington believing Islamabad has not done enough to bring its influence to bear to persuade the Afghan Taliban to renounce violence.

McCain said “close cooperation between the U.S. and Pakistan was essential for securing peace and stability in the region” at the meeting with Sharif and other top Pakistani officials in Islamabad, according to a statement from the Prime Minister’s Office. He also “attached importance to [U.S.] relations with Pakistan, which remained a close friend and ally,” the statement continued.

Sharif also called the Pakistan-U.S. partnership “essential,” and reiterated Pakistan’s commitment to an Afghan-led peace process in Afghanistan, with strong relations between Washington, Kabul and Islamabad a “prerequisite,” according to the statement.

Later Monday the senators flew with the military over South Waziristan in the Federally Administered Tribal Areas to see progress on infrastructure built there with U.S. assistance, including roads and border outposts, and dam and irrigation projects. A statement from the military said they were also briefed on border security, including Pakistan’s bid to fence the frontier with Afghanistan.

Pakistan has received billions in U.S. aid since the invasion of Afghanistan in 2001. Washington is actively considering sending more troops to the war-torn country to help struggling Afghan forces beat back the resurgent Taliban, with American commanders requesting thousands of extra boots on the ground.

On Sunday they met with Pakistan’s top foreign affairs official and the chief of its military. McCain described U.S. engagement with Pakistan in the region as “important” in his meeting with Foreign Affairs Adviser Sartaj Aziz, according to a foreign ministry statement. Aziz for his part vowed Pakistan remained committed to “constructive engagement” with the U.S. in the efforts to create a “stable and prosperous” Afghanistan.

He said Islamabad was ready to deepen its partnership with Washington in the fight against militancy, including against the expanding footprint of the Islamic State group in the region.

Last week, the U.S. imposed sanctions on Syed Salahuddin, senior leader of the Kashmiri militant group Hizb-ul-Mujahideen, to the dismay of Pakistan after a meeting between Indian Prime Minister Narendra Modi and U.S. President Donald Trump.

Kashmir has been divided between India and Pakistan since their independence from Britain in 1947, but both claim the territory in its entirety.

Sharif stressed Pakistan’s belief in Kashmir’s right to self-determination in the meeting with the U.S. senators on Monday, the statement from his office said, calling on Washington to help find a resolution to the nearly 70-year old dispute.