Meals on Wheels Expanded to Lahore, Faisalabad and Peshawar 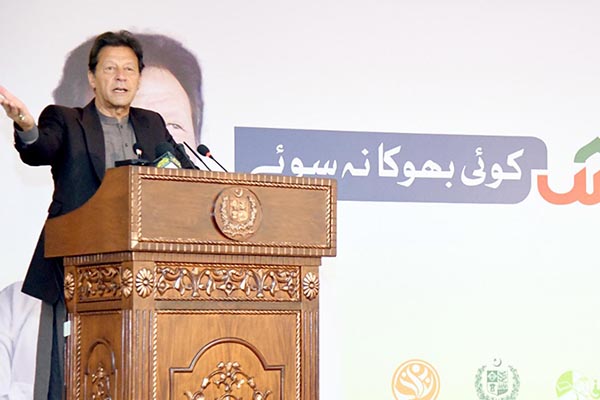 Inaugurating expansion of Koi Bhooka Na Soye, P.M. Khan urges citizens to donate for the program to help the needy and impoverished

Prime Minister Imran Khan on Sunday inaugurated the expansion of his government’s “Meals on Wheels” program—part of the Ehsaas Koi Bhooka Na Soye (no one sleeps hungry) program—to three additional cities in a bid to reduce the burden on daily wagers and impoverished individuals.

Initially launched in the twin cities of Islamabad and Rawalpindi, the program has now been expanded to Lahore, Faisalabad and Peshawar. It is being operated under the umbrella of the Ehsaas initiative, in collaboration with the Saylani Welfare Trust, and is being funded by charity donations.

Addressing the launch ceremony in all three cities virtually, the prime minister reiterated that it was the state’s responsibility to protect the weakest segments of society, adding that the program would benefit the most deserving people who could not even afford to reach any Panahga or Langarkhana being run by the government.

Hailing Pakistanis as being among the most charitable people in the world, Khan said that citizens had helped fund his Shaukat Khanum Cancer Hospital, which provides free treatment to 70 percent of patients, adding that the same largesse would help the Koi Bhooka Na Soye program succeed. Lauding the chief ministers of Punjab and Khyber-Pakhtunkhwa, as well as Senator Sania Nishter and the Saylani Trust, he said their efforts would ensure various aspects of the Ehsaas program would be operated with full transparency.

Urging people to give their zakat in Ramzan to Ehsaas programs, he noted that the government was planning to operate four trucks in each newly added city to distribute food among 500-1,000 people daily at designated service points.

The prime minister also reiterated his plans to provide health insurance to all residents of Punjab and Khyber Pakhtunkhwa, adding that this would provide Rs. 1 million for treatments requiring hospital admissions. In the next phase, he claimed, the network of affiliated hospitals would be expanded and further reforms will be undertaken in the health sector.

Addressing the ceremony, Special Assistant to the P.M. on Poverty Alleviation and Social Protection Senator Sania Nishter said the government would set up a bank account to allow philanthropists to directly deposit their charity.

She said the Meals on Wheels program had launched with two custom-built Ehsaas food trucks that had been operating in Rawalpindi and Islamabad. Each truck, she said, can feed around 2,000 people daily, adding that it operated twice a day throughout the year. Thus far, she said, the program had already served food to over 38,000 people and pledged to expand it even further by the end of the year.