Home Lightbox Means to an End

Means to an End 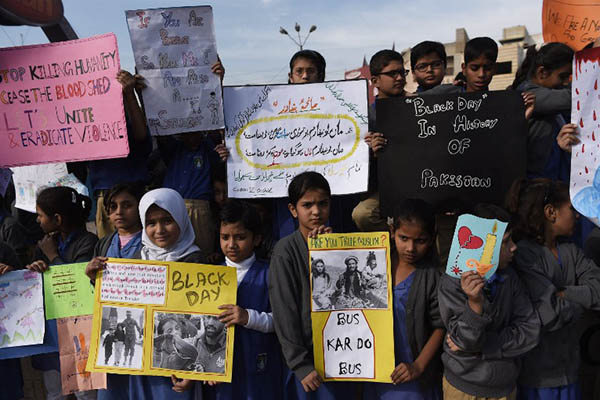 Pakistan cannot afford to be fully utilitarian, nor completely idealistic when dealing with the Taliban threat.

In an August 2009 article for New English Review, Anthony Daniels, a psychiatrist, author and journalist, who uses the pseudonym, Theodore Dalrymple, wrote: “Does the end justify the means? This question, difficult to answer in the abstract with a categorical negative or affirmative, occurred to me when I read that Alberto Fujimori, former president of Peru, had been sentenced to seven and a half years’ imprisonment for corruption, to run concurrently with the 25 years he is already serving for abuse of human rights.”

Fujimori, a Peruvian of Japanese descent and a “distinguished academic agronomist”, became the president in 1990 after defeating internationally-acclaimed writer Mario Vargas Llosa. At the time Peru had faced a decade-long ruthless insurgency by Peruvian Maoists, commonly referred to as Sendero Luminoso (Shining Path), and led by Abimael Guzmán, also known as Comrade Gonzalo.

Fujimori’s biggest challenges were to put down Shining Path and to restore the Peruvian economy. In his 10-year rule, until November 2000, he managed to do both. But he was also accused of and criticized for human rights violations and, later, corruption. The rights violations charges related to Fujimori’s use of the Grupo Colina death squad whose members were accused of kidnappings, torture and extrajudicial killings through the ‘90s in the government’s actions against Sendero.

Guzmán was caught in 1992. Dalrymple says: “The odious and murderous Guzmán was captured, and made to look ridiculous as well as hypocritical. This seemed to me an immense achievement, an uncommon victory over evil.”

The issue offers a terrible dilemma. One can take absolutist positions at either end of the problem. The end always justifies the means or the end does not justify the means because means are important. One is absolutely utilitarian; the other totally idealistic.

“How does one assess his [Fujimori’s] moral, as against his legal, guilt? Is it permissible to commit a lesser evil to avoid a greater one?” Dalrymple goes on to argue: “I am not a utilitarian, but it seems to me unrealistic to say that we should never depart from the ideal in order to prevent a much greater departure from the ideal; that, like Kant, we should tell a murderer where his victim is simply so that we do not commit the moral fault of telling a lie. On the other hand, the doctrine that the end justifies the means has been responsible for many horrors, large-scale and small.”

In this country we are facing a similar, perhaps more acute, situation. Like Peru in the ‘80s and ‘90s, Pakistan is being torn apart by a bevy of terrorist groups that justify their extreme violence on the basis of an ideology. While the Sendero killed in the name of man-made ideology, the terrorist groups here claim to be doing the work of God. There are no limits to what they can and have done. There are no rules, no lines that they have not, and will not cross.

How does one deal with them? I have been assailed by these thoughts every time they have struck. Are these people we want to afford trials and due process?

My instinctual response says no; my evolved response says we need to be discriminate. Some readers wrote me after my article What’s the Plan, raising more or less the same questions and asking if this was the time for legal nuances. I hear them because the question continues to vex me.

I must confess that I do not have a clear answer. The history of low-intensity, simmering conflicts has successes and failures for both approaches. The more nuanced British approach to the Northern Ireland conflict gave better results than the earlier strategies adopted by London and which were reflected in the phrase ‘black-and-tans’. Irish playwright Brian Friel’s 1980 play Translations is not just about language and 19th century Ireland but depicts the horrors of political and cultural imperialism. The desperation of the Irish is caught in Yeats’ line in Easter 1916, “O when may it suffice”?

Equally, what happened in Peru or in Sri Lanka are success stories at the cost of human rights. There are too many uncertainties, imponderables and unknowns. Taking the case of Peru and Fujimori, Dalrymple voices them in very cogent lines:

“And while it is true that Sendero was defeated by the methods employed, can we know for certain that it could have been defeated only by the methods employed? This would have to be shown for a complete vindication of Fujimori, even on an ends-justify-the-means view of political morality. Again, the answer must be no, we cannot know it. Common sense suggests that a Peruvian catastrophe (if we accept there was going to be one) could not be averted by men with entirely clean hands: but we can’t say we know this beyond all doubt, or exactly how minimally unclean those hands had to be, and whether Fujimori kept that uncleanliness to an absolute minimum [my italics].

“Similarly, we can’t know for certain how important Fujimori was to the defeat of Sendero. No man could have defeated the movement single-handed; Fujimori was not engaged in personal jousting with Guzmán in a mediaeval tournament. It was the intelligence services that found Guzmán in hiding and decapitated the movement thereby, the single most important blow ever struck against Sendero; this might have happened whoever was president and had no human infringement of human rights by government forces taken place. Would Sendero have been defeated if Vargas Llosa had been president and had used different methods? Indeed, would Vargas Llosa have used different methods? Again, we can’t know.”

Those of us who have allowed instincts a free rein might consider these thoughts to be academic. They would point to the severity of this emergency and argue that this is the time to act like Laertes, not ‘procrastinate’ like Hamlet. They will not be entirely wrong; but they are not entirely right either. They have a point insofar as the practitioner, even the thinking one, has to act—ultimately. They are wrong in that a practitioner’s actions must be informed by the nuances of a problem. Let’s not forget that too much of Laertes is as bad as too much of Hamlet. The practitioner must find ways to act judiciously in some ways and ruthlessly in others. Not just that. Sometimes, to act ruthlessly is the only judicious course of action. Nonetheless, he can do neither without thinking.

The emergency we are facing requires multiple strategies, not just one. It cannot afford the absolutism of either utilitarianism or idealism. But most of all, it cannot afford knee-jerk reactions, whether in hanging to death people on death row or raining bombs in the tribal areas. Ruthlessness must be discreet. That means hitting where it hurts the most and results in a force-multiplication effect. Simply flailing our arms in anger will not do.

All this erudite intellectual debate is all nice and well. But the basic question is not whether ends justify the means or if the means are also important. The question is whether the original goal was moral, ethical and practical.

Let us not fudge around and forget the past 3 decades and shift goal posts. The ends is not defeating the taliban. What was the original goal? Client state in Afghanistan and Severing Kashmir from India. This was and still is the end.

Now we have the question: Does establishing a client state in Afghanistan and Severing Kashmir from India justify creating Taliban and getting a lot of Pakistanis killed and the moral fiber of the society damaged or should these objectives be pursued by other legal means? The point is that there are no legal means. Afghanistan doesnt want to become a client state and India doesnt want to give up kashmir. This is why apart from a few people writing columns here and there, nobody really wants to give up the Jihad machinery. That would include this author as well who has talked about terrorism as a valid tool of international relations (euphemistically ofcourse).

Please analyze that in the next column. It would be far more interesting to read. Please save us the pseudo intellectual pontification about what to do with the Taliban.

I think it is difficult for defence analyst to nail down hard questions. I see this man has definitely intelligent but when I see his programs it revolves with vague questions and consulted arguments. On his Moeed was spot on yesterday but I am amazed none has guts to nail down real jihadi machine of ISI and military mind set. Further more I saw one vedio with Moeed Pirzada wherein Ejaz was vehemently defending Hafiz Saeed. This was so strange and I am sure till today Ejaz will defend him. I believe it will take another 2-3 tragedies inside Pujab to realize these fellas what sort of monster they have created. Until then nothing will change.