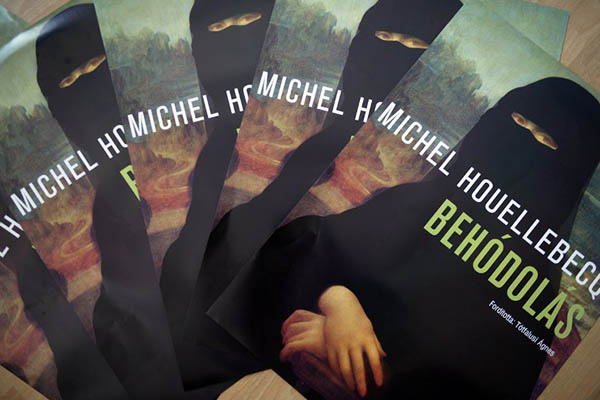 The fear-tinged portrayal of Islam in literature and the media has become “obsessional,” controversial French writer Michel Houellebecq said in an interview published on Sunday by British newspaper The Guardian.

Houellebecq’s latest work, Submission—a fiercely-debated novel which imagines a France in 2022 where Islamic law is enforced and French women are ordered to be veiled—appears this week in English translation. The stream of books and magazine covers playing on fear of Islam “has effectively become obsessional,” Houellebecq, 59, told the British daily.

Asked whether his book was part of that, Houellebecq replied “certainly, certainly.”

“But I don’t feel like apologizing. It’s impossible to increase the proportion already given to Islam in the news. We’re already nearly at 100 percent,” he said.

Propelled to fame in France and then abroad for a string of ironic, misanthropic novels, Houellebecq was accused of inciting racial hatred in 2002 after he said Islam was “the stupidest religion.” He was acquitted of all charges and later said he had changed his mind upon reading the Quran and now felt Islam could be negotiated with.

Submission (Soumission in French) caused a storm when it was released in January, with some intellectuals saying Houellebecq’s provocation was irresponsible and had played into the hands of extremists and xenophobes. Its publication coincided with two jihadist attacks in Paris, one on the offices of the satirical magazine Charlie Hebdo, which had published caricatures of Islam’s Prophet.

The Guardian said Houellebeq was now under a round-the-clock police escort. Asked whether he was Islamophobic, Houellebecq said: “Probably, yes, but the word phobia means fear rather than hatred.” The fear was of terrorism, he said “That it all goes wrong in the West; you could say that it’s already going wrong.”

Even if terrorists were only a tiny number of people, “maybe very few people can have a strong effect. It’s often the most resolute minorities that make history,” said Houellebecq.