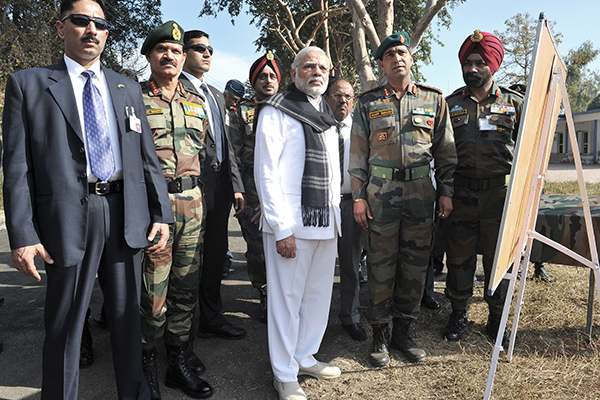 India’s Prime Minister Modi with his Army chief and others at Pathankot, Jan. 9. Press Information Bureau/AFP

The media in Pakistan ran away with the “exemption” given by India to Pakistan and its agencies in the Pathankot airbase attack and ignored the second part of statement made Thursday by the director-general of India’s National Investigation Agency. Four terrorists entered the airbase in January and killed seven security personnel before being killed, and India continues to blame the outlawed Jaish-e-Muhammad for the attack.

Mixing righteous anger with repartee, TV anchors and newsmen connected India’s latest “blunder” with similar charges made in the past against Pakistan. They should have taken note of what the Indian official had implied: that someone from inside Pakistan carried out the attack without the backing of the state. (Pakistan had conceded that in the 2008 Mumbai attacks also.) That Pakistan cooperated with India in investigating the Pathankot case, and arrested the Jaish chief, Masood Azhar, implied that there was no such involvement. But the fact that someone from inside Pakistan goes and attacks inside India should worry the Pakistani media.

The truth is that Jaish exists under another name after being let off by the judiciary and is universally condemned for its old connection to Al Qaeda and its involvement in terrorism inside India. Similar is the case of Jamat-ud-Dawah, whose leader Hafiz Saeed is on the wanted list of the United Nations. Embarrassment for Pakistan occurred last month when Jamat-ud-Dawah was discovered running illegal courts across Pakistan, including in Islamabad. This became public knowledge when a man served summons by one of these courts in Lahore filed a writ in a real court. Dawn, on June 1, reported: “A property dealer who had been pursuing litigation in the Lahore High Court against a religious organization’s self-styled ‘Shariat Court’ was briefly kidnapped, intoxicated and threatened by two unidentified men on his way to the court.”

Pakistan has activated its counterterrorism department against terrorist sleeper cells, uncovering and killing 59 known terrorists in encounters in the Punjab in May alone. By “protecting” Jamat-ud-Dawah and Jaish-e-Muhammad, however, it is faced with international isolation. Engaging in verbal combat with India on the media will be counterproductive as Pakistan loses even the marginal advantage gained through India’s latest statement.