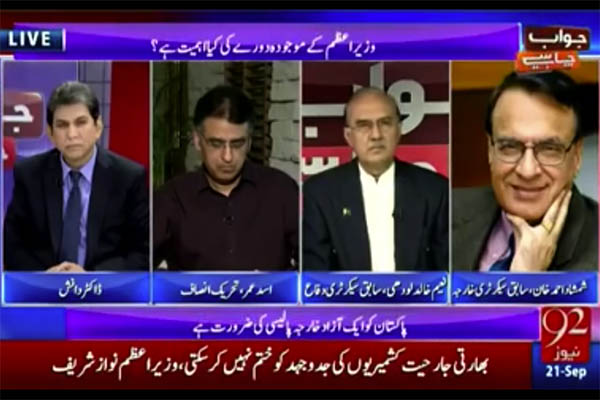 The free-for-all on our television screens.

The best in Pakistani media become ordinary when taking part in a Pakistan-India media war. This was once again in evidence this week after the Uri incident in Kashmir. India accused Pakistan of sending four terrorists across the Line of Control who ended up killing 18 Indian troops. The Indian TV anchors and “analysts” lost their cool and were abusive, threatening to teach Pakistan a lesson with a “deep strike” invasion.

Pakistani counterparts were no better. It is a pity that even women TV anchors were asked to hurl sarcastic broadsides in the direction of India saying goodbye to the charm with which they normally lighten the routine of bad news about Pakistan. Old generals long out of touch with the current global political landscape spoke of another Pakistan-India war predicting an Indian defeat at the hands of Pakistani warriors hardened by blows received at the hands of the Taliban. On the Indian side similar octogenarians reminded Pakistan of its past defeats and scoffed at the prospect of the two neighboring states dying in a nuclear winter.

Then came the point where combative polemic becomes self-damaging. One aggressive Pakistani anchor with a large worshipful following among those who want a final jihad with India actually noted that there were too many Indian films in Pakistani cinemas which should now be banned. Not stopping at that he also condemned the Pakistani actors and singers who make a living working in India, and recommended that Pakistan take steps to recall them and outlaw their future visits.

Indian films have become watchable after Indian producers found a market in Pakistan and realized they couldn’t go on indulging in cheap anti-Pakistan jingoism if the films were to sell. In fact, some films made a lot of money in Pakistan simply because they showed Pakistan and Muslims in a good light. However, if Pakistan bans Indian films, the trend will reverse. That is the positive side of the free market in a globalized world: you can’t carry on fighting if you want to prosper economically.