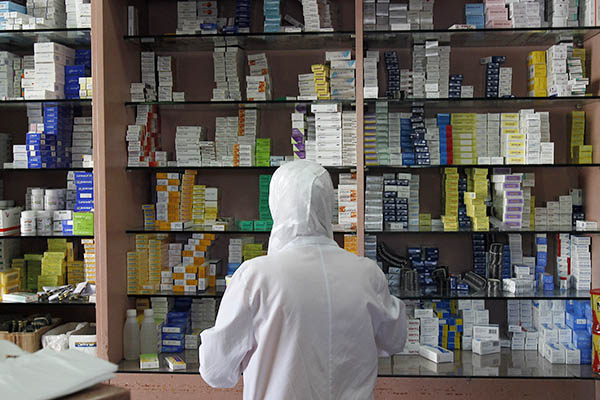 Not only is Syrian father Motaz struggling to put food on the table, he must also pay astronomical prices to import insulin for his diabetic son because of drug shortages in the war-torn country.

Drug production in Syria has plunged ever since an uprising broke out against President Bashar al-Assad 30 months ago and degenerated into civil war.

“I must count every penny because my son’s treatment takes up a big portion of my salary,” said the 46-year-old Motaz. His three children no longer enjoy any day trips because “the priority now is to treat the 12-year-old boy,” he said.

The shortage caused by the raging war has created “a very critical situation” in Syria, said the World Health Organization’s Elisabeth Hoff. “Pharmaceutical factories only cover 20 to 30 percent of the needs, though they used to cover 90 percent” before the conflict, she said.

Hoff explained that most factories are located in the central city of Homs, Aleppo in the north and in the outskirts of Damascus. The three areas have seen some of the worst fighting and destruction in the conflict.

Eighteen of 73 factories have closed down because of damage, transport difficulties and a halt in raw material imports.

Hoff complained, saying “vital materials such as medicines must not be placed under such restrictions.”

The Syrian pound has lost much of its value during the course of the conflict, and there is a vast gap between the official exchange rate and the black market rate that factories are forced to use when importing goods.

Yet Prime Minister Wael al-Halqi insisted in a televised statement on Tuesday that “Syria’s drug security is stable.”

“All medicines are available, barring some … which will be imported from friendly countries, mainly Iran, Russia, China, Pakistan, the BRICS countries and Cuba,” Halqi added.

But the Central Bank has halted all transfers at the official exchange rate, forcing factories to stop producing several drugs because of the higher costs. “The crisis is having a very serious effect on the pharmaceutical industry,” said health ministry lab director Habib Abbud. He said just “10 factories could cover Syria’s needs” if “they can import raw materials without restrictions.”

Abbud described those who have continued to produce medicines as “heroes,” adding that the ministry provides people who have health insurance with free drugs at hospitals. But others struggle to find medicines, a real concern Hoff said, particularly for those wounded in the fighting.

Umm Maher, 75, spoke to a friend in Europe to try to obtain a medicine she needs for her hypertension. She complained the drugs will cost her “10 times more” than they would have if she could have purchased them locally.

Umm Maher refuses to buy smuggled drugs, even though they are cheaper, because she fears they could be expired, or contain different ingredients than advertised.

Diabetics complain that their insulin is brought into the country without the necessary refrigeration.

Hoff says the priority now is to prevent epidemics by taking steps against communicable diseases.

To help ease the shortage, the government has cancelled pharmaceutical exclusivity rights, so any company can produce any medication. Some factories have stepped up production of drugs formerly made by companies that have been affected by the war, in order to make up for shortfalls, said Basel al-Jundi, production manager at the Ibn Zaher factory.

But this has had a “counter-effect by raising the cost of imported materials,” causing companies to lose profits, Jundi said.

Factories are committed to continue production, “but the problem … is that they are funding themselves from profits. While they can handle the burden to an extent, the risk of bankruptcy is there,” he added.