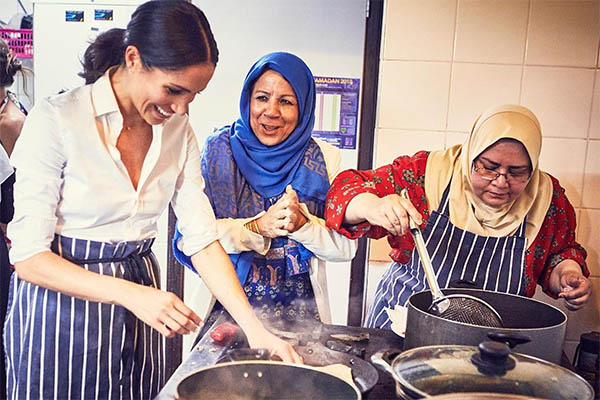 In first solo charity project, Duchess of Sussex has written foreword to book produced by women affected by the 2017 disaster

In her first solo charity project, Meghan, the newlywed wife of Britain’s Prince Harry, launches a cookbook this week in support of families affected by the Grenfell Tower fire disaster in London.

The Duchess of Sussex has written the foreword to the recipe collection entitled Together: Our Community Cookbook, produced by women who suffered from the fatal blaze.

The June 2017 fire in a 24-storey residential block killed 71 people and left many more living in temporary accommodation. Women from the affected community made use of a kitchen in a local Muslim cultural center to prepare food for their families.

The duchess has made several visits to the kitchen and helped bring the book to fruition, as well as narrating a video about the initiative. “I immediately felt connected to this community kitchen; it is a place for women to laugh, grieve, cry and cook together,” she wrote in the foreword. “Melding cultural identities under a shared roof, it creates a space to feel a sense of normalcy—in its simplest form, the universal need to connect, nurture, and commune through food, through crisis or joy. Through this charitable endeavor, the proceeds will allow the kitchen to thrive and keep the global spirit of community alive.”

The book showcases more than 50 recipes from across Europe, the Middle East, North Africa and the eastern Mediterranean.

Meghan, a former U.S. television actress, married Harry at Windsor Castle in May. Joined by Harry, she is hosting an event at Kensington Palace on Thursday to mark the launch of Together.

The couple is due to undertake their first major official trip outside Britain from Oct. 16 to 31, touring Australia, New Zealand, Fiji and Tonga. They will take in Harry’s Invictus Games in Sydney: a paralympic-style event for wounded military veterans.

Fire on Train Traveling from Karachi to Rawalpindi

Prince Harry ‘Over the Moon’ as Meghan Gives...