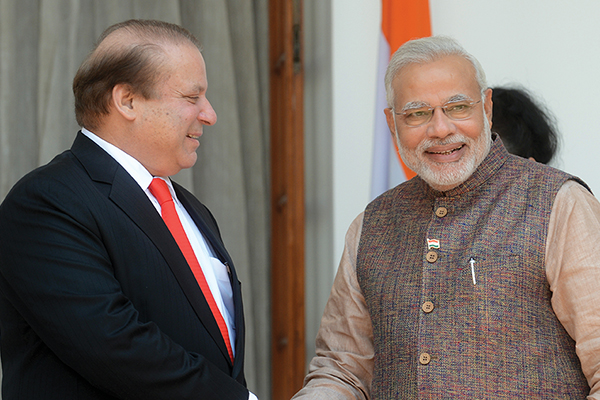 Will Modi’s words translate into action?

Nawaz Sharif and Narendra Modi have been exchanging letters since the former attended the latter’s swearing-in ceremony on May 26 and swapped gifts. Since the visit itself was an opportunity mishandled by Team Sharif, these exchanges are reassuring.

Sharif—whose promising Lahore Summit in 1999 with the last prime minister from the Bharatiya Janata Party, Atal Bihari Vajpayee, was aborted with the Kargil misadventure—landed in New Delhi with the intention of speeding up bilateral cooperation. But the planning was haphazard, and the visit was viewed warily in Pakistan, which distrusts and dislikes Modi for his crimes of omission and commission in Gujarat as well as for his jibes at Muslims and Pakistan during his election campaign.

The two prime ministers met twice at Hyderabad House on May 27. The first meeting lasted 35 minutes; the second, a one-on-one, went longer. The personal conversations between them were warm and pleasant by all accounts. Sharif expressed his broader cooperative intent through couplets from Bulleh Shah; Modi condemned violence in the name of religion.

A senior Pakistani official proclaimed the meetings as “excellent” and “beyond our expectations.” But the optimism in his very brief comments was conclusively shattered within 15 minutes of Sharif’s departure from Hyderabad House.

Indian’s foreign secretary, Sujatha Singh, told the Indian media right after the meeting that Sharif had been given a five-point list of demands, including on cross-border terrorism, the Line of Control, and Mumbai. The secretary took her instructions from the hawkish new foreign minister, Sushma Swaraj, who had likewise contributed to the failure of the 2001 Agra Summit. Indian and Pakistani news channels went into a tizzy. They reported, wrongly, that the K word had not been mentioned at all and that Modi had read Sharif the riot act. Thirty minutes later, instead of Singh’s counterpart speaking, Sharif took it upon himself to tell the Indian media that his meetings with Modi had actually been “good” and “constructive.”

It took another five hours for Pakistan to elaborate on the meetings. (This was done through my interview with Sharif that I reported on Capital TV.) Had Pakistan kept control of the narrative from the onset, Sharif would not have had to face the embarrassment of being viewed by his countrymen as both naïve and overly enthusiastic toward at-any-cost ties with India.

The Pakistan side stumbled hugely on its messaging, with serious implications on how Sharif’s trip was interpreted in Pakistan and what policy message Pakistan’s visit left in India. The fact that Sharif didn’t meet with Kashmiri leaders in India, but found time for Indian businessmen and Bollywood celebrities, also earned him criticism at home.

Sharif told me Modi had welcomed him with “immense warmth,” responded to his suggestions with “enthusiasm,” and called him “a man of peace.” Insider accounts from Pakistani and Indian sources support his take on the meetings. But his team’s inability to take timely charge of the narrative made Sharif come off as weak and incapable of forcefully or wisely articulating and promoting Pakistan’s interests.

Since the Indian media had reported that Sharif’s visit happened despite alleged objections from the Pakistan Army, Modi hailed the visit as “brave.” He told Sharif that Indian perceptions of Pakistan as a supporter of violence were an impediment to the goal of normalization of relations, and urged him to work toward ending tensions along the Line of Control. Modi also complained about Pakistan’s “slow” pace of action on the 2008 Mumbai bombings.

Terrorism, Sharif agreed, was punishing for Pakistan and something his government is committed to addressing. He told Modi that the Mumbai suspects were being tried in court. Both agreed on promoting trade, and Modi suggested Pakistan import cheap tea from India and also electricity from Gujarat. Sharif did raise the Kashmir issue: he said the “heavy mandates” won by his PMLN and Modi’s BJP allowed both governments to agree on a solution acceptable to the Kashmiris, Pakistanis, and Indians. He also said normalizing relations and utilizing backchannel diplomacy are necessary for an eventual settlement on Kashmir.

If Modi’s words to Sharif translate into actual policy moves by South Block, the foreign secretaries of both countries will meet and the backchannel will be reactivated. The chemistry between Sharif and Modi and their personal involvement in the process can actually help both sides break newer ground and, to the extent politically possible, absorb the shock of any untoward incident wrought by nonstate actors.

Perceptions aside, in the final analysis, three things will determine the success of Sharif’s visit. One: the secretary-level talks and what sort of “new architecture,” as Sartaj Aziz put it, of dialogue they lead to. Two: the recommencement of the influential and dependable diplomatic backchannel. Three: a deal on trade through the proposed Nondiscriminatory Market Access scheme for India. If Modi goes ahead and revokes India-administered Kashmir’s “special status,” therefore owning the disputed territory as India proper, Sharif will lose even more face at home.

Sharif and Modi will have to work sincerely to get any real progress on Pakistan-India relations during their respective terms. The bilateral “composite” dialogue had been ongoing, in fits and starts, since Sharif and I. K. Gujral, his then-Indian counterpart, agreed to it in 1997. But substantive progress remained slow. There was some inching ahead on civilian movement across the Line of Control and on trade, but other issues (Siachen, Sir Creek, etc.) remain unresolved thanks to Kargil, nonstate actors, Mumbai, the Indian Army’s hawkishness, Pakistan’s political instability, continued militarization of and human-rights violations in Jammu and Kashmir.

The significance of the composite dialogue was that it marked a major change in the policies of both Pakistan and India. Pakistan gave up its “Kashmir first” policy and India its “no talks on Kashmir” policy. Instead, both sides agreed to work on a “Kashmir-plus solution.” Some fear that the focus on improving bilateral trade will push Kashmir out of the picture entirely. Even so, the fact is that the Kashmiris have increasingly acquired agency on the question of their own political future; and Pakistan is no longer required to manage the issue for them. Last year’s deadly skirmishes along the Line of Control also ensure that Kashmir will very much remain on the agenda.

By visiting India, Sharif has gone more than halfway toward establishing his bona fides as a partner for peace with India. Modi would be unwise not to reciprocate. If the hawks in New Delhi embarrass Sharif and Pakistan in the future, as the Indian foreign secretary did, the onus of more bad blood between the two countries will rest solely on Modi’s shoulders.

To call them men of letters is an insult to the intellect of the men and women of the sub-continent.They have nothing to do with literature and literary works.Both of them are devoid of fine taste, and hardly can understand the beauty of a literary piece.
not written by them.

Even the letter exchanged between them are not written by them. They just signed them,