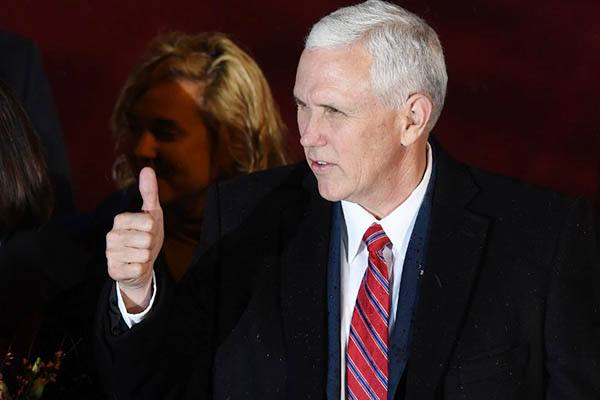 After Defense Secretary James Mattis’ strong affirmation that NATO was a “fundamental bedrock” for the United States, Secretary of State Rex Tillerson stuck to existing policies during a G20 foreign ministers meeting in Bonn, Germany. At the Munich Security Conference on Saturday, Pence will “outline the administration’s view of the transatlantic relationship,” a senior White House foreign policy adviser said.

“He’s going to reassure our allies of our commitment to our European partners and the reassurance for the transatlantic alliance,” said the adviser, adding: “You’ll hear too… that we are the most secure and most prosperous when both the U.S. and Europe are strong and united.”

Trump’s criticism of NATO as “obsolete,” his praise for Britain’s decision to leave the E.U. as well as his softer approach towards Russia have unnerved allies. But over the past week in Europe, key members of his administration have come out to present a diverging stance from him.

At a NATO summit in Brussels on Thursday, Mattis said Russia must first “prove itself” and follow international law before the U.S. and NATO can consider closer military ties. He called the transatlantic bond “as strong as I’ve ever seen it,” and stressed America remained “rock solid” in its support of Article 5—NATO’s core collective-defense tenet that says an attack on any country will be met by a response from the alliance.

Likewise, Tillerson was cautious in his dealings with Russia, despite Trump’s pledges for closer ties.

Following his first sit-down with Russian Foreign Minister Sergei Lavrov in Bonn on Thursday, Tillerson said the U.S. would seek cooperation with Moscow only when doing so “will benefit the American people.”

Explaining the policy back-and-forth, senior U.S. Senator John McCain said Trump sometimes “contradicts himself, so some of us have learnt to watch what the president does as opposed to what he says.”

“Make no mistake, these are dangerous times, but you should not count America out,” he said in Munich.

Fed up with Trump for putting into question long-standing foreign policy, Europe’s top politicians warned Washington not to take transatlantic ties for granted.

German Defense Minister Ursula von der Leyen warned the U.S.: “Your tone on Europe and NATO has a direct impact on the cohesion of our continent.” And Polish President Andrzej Duda weighed in: “The basis of our strength is our transatlantic bond. We must not recklessly put it into question. We all realize that the consequence of a potential destabilization on Europe will be felt on both sides of the Atlantic.”

Ukrainian President Petro Poroshenko also joined von der Leyen and Duda in warning against a rapprochement with Russia behind the backs of allies.

Russia is hoping Trump will make good on his pledge to improve tattered ties with Moscow and seek cooperation in the fight against the Islamic State jihadist group. But for now, his administration is holding fast to sanctions against Russia over its role in the Ukraine conflict. The position will be reiterated by Pence, who will underline that the Minsk accord mediated by France and Germany is “the framework for peace” in Ukraine. He will signal that the goal is “to get both the Ukraine and Russia to come to the table and implement Minsk, and that’s the only thing that’s going to peacefully resolve the conflict.”

At the same time, Pence will ask allies to step up their defense spending to NATO target of two percent of output. Europe’s biggest economies—Germany, France and Britain—have all agree it is only fair for NATO members to meet their pledge. But European Commission chief Jean-Claude Juncker pointed out that the bloc’s contribution to international security is not limited to military spending.

“If one puts together what Europe does in the area of defense plus in the area of development policies…as well as in humanitarian aid, then the comparison with the United States would look rather different,” he said.