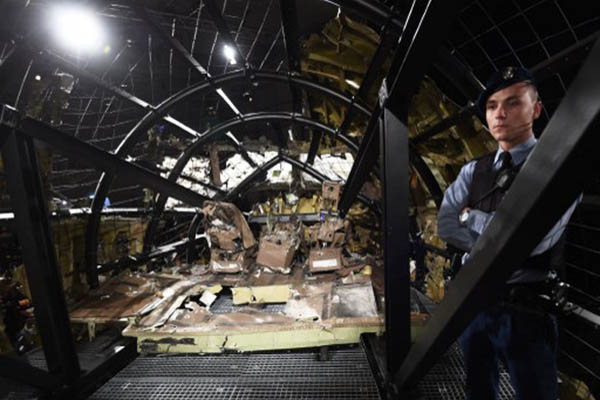 Investigation report finds Russian-made missile hit forward section of aircraft, causing it to break up in the air.

A partial reconstruction of a Malaysia Airlines jet made of wreckage found strewn across eastern Ukraine told the graphic story Tuesday of its violent last moments after being hit by a surface-to-air missile.

Dutch-led air crash investigators concluded some of the 298 people on board may have known for up to 90 seconds after the Russian-made BUK missile ripped into the left side of the cockpit that they were about to die.

“The forward section of the aircraft was penetrated by hundreds of high-energy objects coming from the warhead,” said the report released Tuesday by the Dutch Safety Board concluding a 15-month investigation. “As a result of the impact and the subsequent blast, the three crew members in the cockpit were killed immediately and the airplane broke up in the air.”

The ghostly reconstruction of the Boeing 777—shot down over eastern Ukraine on July 17, 2014 en route from Amsterdam to Kuala Lumpur—loomed large over the press conference called to unveil the final report. Painstakingly reassembled, with the damaged wreckage fitted over a steel and wire mesh frame, the mangled front section of the plane dominated the hangar at a Dutch air base where hundreds had gathered for the report’s release.

One moment the passengers were safely reclining in their seats, the next instant they were plunging towards the ground from 33,000 feet, according to the report.

“It cannot be ruled out that some occupants remained conscious for some time during the one to one-and-a-half minute for which the crash lasted,” the report said.

The wreckage was put together after being transported back from war-scarred eastern Ukraine by rail and plane to the Gilze-Rijen air force base in the Netherlands. Journalists allowed a closer look could see numerous holes in the side of the fuselage around the cockpit area, as well as the damaged pilots’ seats.

“The total number of high-energy objects [to hit the plane] was well over 800,” the board said in its report, concluding it was consistent with that of a detonation by a Russian-made BUK surface-to-air missile.

A tear in the fuselage clearly shows how the front part of the plane was torn off, after which it broke up in the air, the board’s chairman Tjibbe Joustra said. “It’s so eerie, looking at the exact spot where a person lost their life,” said one Dutch journalist as he stood inside the wreck.

Joustra said that the tail section “probably crashed before the center section” containing the engines, which “hit the ground upside down and caught fire.” There was a “deafening noise of the impact, abrupt deceleration and acceleration, decompression and mist formation, reduced oxygen levels, extreme cold, powerful airflow and objects flying around,” the investigators concluded.

Some passengers suffered serious injuries that probably caused their deaths. “In others, the exposure led to reduced awareness or unconsciousness in a very short space of time,” the investigation found. “It was not possible to ascertain the time of death at which the occupants died; it was established that the impact on the ground was non-survivable,” the report added.