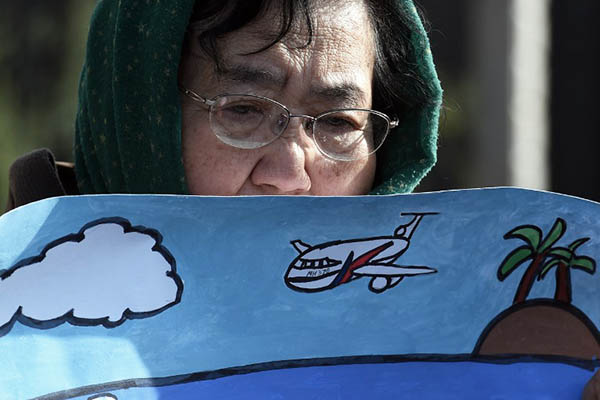 Emotional families marked the first anniversary of the disappearance of flight MH370 Sunday as a new report said the battery on its black box locator beacon had expired, but shed no new light on the cause of the disaster.

Prime Minister Najib Razak said his nation remained committed to the search for the Malaysia Airlines jet, believed to have crashed in the southern Indian Ocean, and was hopeful it would be found. Next of kin, many of who have criticized Malaysia’s handling of the disaster, held ceremonies in Kuala Lumpur and Beijing to remember the missing and urge authorities to keep the arduous and expensive search going.

“The only answer I want is where is the plane, then only will we know,” said Jacquita Gonzales, wife of the flight’s cabin crew supervisor, Patrick Gomes. “The whole world has heard what he [Najib] has said, so they can’t go back on their word.”

A report by an international investigative team released Sunday raised no red flags relating to the crew or the aircraft’s condition to indicate any cause for the disappearance. But it said the 30-day battery powering the underwater locator beacon on the flight data recorder had expired. Although the battery on the plane’s cockpit voice recorder was up to date, this could have contributed to the failure to find the plane, said Gerry Soejatman, a Jakarta-based aviation consultant. “My major worry is that [search vessels] may have gone over the aircraft but not heard the pings because of this,” said Soejatman, who added that the report otherwise largely restated what is already known about MH370.

A yearlong hunt in the deep ocean far off Australia’s west coast, where satellite data indicate the Boeing 777 crashed, has yielded nothing yet. “Together with our international partners, we have followed the little evidence that exists,” Najib said in a statement. “Malaysia remains committed to the search and hopeful that MH370 will be found.”

The plane inexplicably veered from its Kuala Lumpur-Beijing route on March 8 of last year with 239 passengers and crew aboard. Relatives and friends of the missing held an emotional public remembrance in Kuala Lumpur that included prayers and live video links with other next of kin around the world. A temporary wall erected for the occasion contained scrawled messages such as “Never give up hope” and “I miss you so much brother and sister, please come back.”

In Beijing, relatives who have bitterly criticized Malaysia’s national carrier and government for their handling of the crisis held a small protest near the Malaysian embassy to mark the anniversary. As a hefty police contingent blocked off the embassy, they shouted slogans including “Fight to the end” and “Malaysian government—apologize to us!” Earlier Sunday, the relatives visited the Lama Temple, a popular Tibetan Buddhist place of worship and tourist site, to discreetly pay their personal respects.

A small silent rally was also held in Paris, with demonstrators submitting a petition to the presidential palace signed by more than 18,000 people demanding “the truth.”

Sunday’s report said investigators had probed a range of issues including the personal, psychological and financial profiles of the jet’s captain Zaharie Ahmad Shah and his co-pilot Fariq Abdul Hamid, as well as the backgrounds of the 10-person cabin crew. But although some suspicion had fallen on the cockpit crew, the report mentioned no evidence implicating either of them.

It also said that according to available data and maintenance records, nothing alarming was detected in the plane’s major mechanical systems. It noted that as investigators still lack any trace of the jet the probe remained a work in progress.

Some families still hope their loved ones are alive, clinging to conspiracy theories of a hijack or kidnapping, with many rejecting the report’s findings. “It’s nonsensical ass-shielding,” said Sarah Bajc, whose partner Philip Wood was on board. She ridiculed the report for saying investigators had interviewed 120 people, which she said was “less than our tiny underfunded private investigation has done.”

The report, however, said civilian radar had tracked the plane for a short time after it diverted. Previous government statements had indicated that only Malaysia’s military radar had monitored it, though it took no action. Families have said Malaysian inaction allowed the plane to go missing. Malaysian officials could not be reached for comment.

Australian Prime Minister Tony Abbott, meanwhile, said Sunday that while the current search is expected to be completed in May, it could be extended if there are “reasonable leads.”