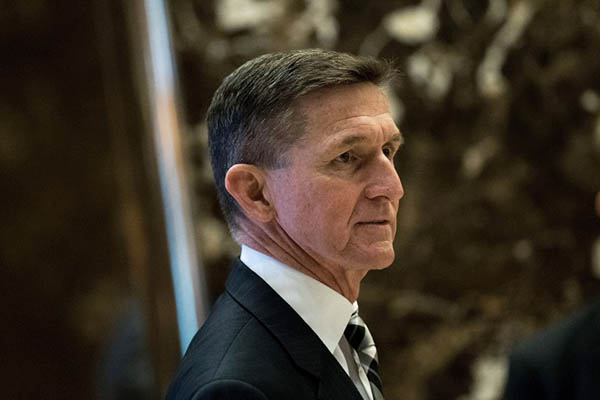 U.S. President Donald Trump’s former national security adviser Michael Flynn defied a Senate subpoena Monday for documents on his links to Russia, saying it came amid a stream of “outrageous allegations” that “feed the escalating public frenzy against him.” But Flynn quickly faced fresh accusations from a top Democrat saying he misled the Pentagon about his Russia contacts one year ago.

Elijah Cummings, the senior Democrat on the House Oversight Committee, said Flynn failed to report to Pentagon investigators payments he received from Russian bodies or attending a gala with Russian President Vladimir Putin in a gala in Moscow. Citing internal Pentagon documents, Cummings said they “appear to indicate that General Flynn lied to the investigators who interviewed him in 2016 as part of his security clearance renewal.”

The revelation ratcheted up pressure on Flynn, the former defense intelligence chief who has become a key target in the explosive probe into links between Trump’s presidential campaign and Russia’s alleged interference in the 2016 election. In a letter to the Senate Intelligence Committee, Flynn’s lawyer Robert Kelner said Monday that he was invoking his constitutional protection against self-incrimination in refusing to comply with their subpoena.

“The context in which the committee has called for General Flynn’s testimonial production of documents makes it clear that he has more than a reasonable apprehension that any testimony he provides could be used against him,” Kelner said. “He is the target on nearly a daily basis of outrageous allegations, often attributed to anonymous sources in Congress or elsewhere in the United States government.”

The refusal to comply risked Flynn being cited for contempt of Congress. But in a joint statement, the panel’s chairman Senator Richard Burr and vice chair Senator Mark Warner only said they were “disappointed” in Flynn’s stance. “We will vigorously pursue General Flynn’s testimony and his production of any and all pertinent materials pursuant to the committee’s authorities,” they said.

Flynn is one of a number of Trump associates being examined in separate investigations into Russia’s election interference by the Department of Justice and several committees in Congress. The main focus of the probes is whether any of them colluded with Moscow. But increasingly Flynn is being probed for his own allegedly deceptive behavior about contacts he had with Russians before and after the election.

Investigators are examining Flynn’s paid trip to Moscow to attend an RT television gala in 2015, where he sat with President Vladimir Putin, and his multiple communications with Russia’s U.S. ambassador last December after the election. Flynn was fired as White House national security adviser in February, just weeks into the job, amid concerns that he may have been compromised by those contacts.

Kelner told the Senate panel that if Flynn complies with the documents subpoena, he risks giving up the ability to exercise his Fifth Amendment rights if he is ordered to testify in person, or in any of the investigations. The lawyer reiterated his offer for Flynn to testify “should the circumstances permit, including assurances against unfair prosecution,” which analysts interpret as seeking immunity for his client in exchange for testimony.

Cummings, however, only widened the accusations against the retired lieutenant general in a letter addressed to Jason Chaffetz, the Republican chairman of the Oversight Committee. The Democratic congressman said a March 2016 Pentagon report on Flynn’s security clearance application showed that Flynn claimed his trips abroad were funded by U.S. companies, when documents show that RT paid for the December trip to the Moscow gala.

In addition, Cummings charged, Flynn did not report his meeting with Putin, reporting only that he had “insubstantial contact” with foreign nationals. “It is difficult to understand how General Flynn could have believed that his dinner with Russian President Vladimir Putin was an ‘insubstantial contact’,” Cummings wrote. Cummings told Chaffetz that the Pentagon report supported his demand that the committee issue a subpoena to force the White House to turn over documents relating to Flynn.

Meanwhile, Chaffetz postponed, after speaking with James Comey, a hearing initially set for Wednesday at which the sacked FBI chief had been invited to testify.