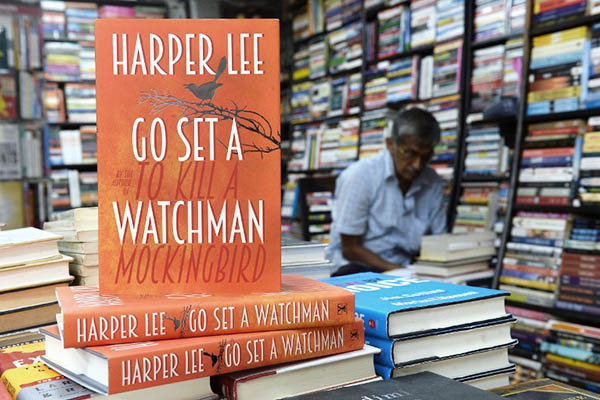 ‘To Kill a Mockingbird’ sequel hailed as one of the biggest literary events in years, with initial print run of two million copies.

Bookstores opened at midnight to commemorate Harper Lee’s controversial and eagerly awaited second novel, which flew off the shelves more than half a century after the groundbreaking success of To Kill a Mockingbird. The global release of Go Set a Watchman has been feted as one of the biggest literary events in years.

Thanks to pre-orders, it has been the number one bestseller at online retailer Amazon for months, and publisher HarperCollins has ordered a first print run of two million copies.

Lee’s only previous novel, To Kill a Mockingbird, is considered a 20th century masterpiece that defined racial injustice in the Depression-era South and became standard reading in classrooms. Published in 1960, it was translated into more than 40 languages and adapted into an Oscar-winning film starring Gregory Peck.

In Britain and Ireland, retailer Waterstones organized midnight openings so that fans could get their hands on print editions as soon as possible, while Amazon delivered pre-ordered Kindle editions at the stroke of 12. British independent chain Foyles also screened the 1962 Oscar-winning adaptation of Mockingbird before opening the tills in central London.

Various midnight openings were also scheduled in the United States, although in New York, Barnes and Noble was only set to open its flagship Fifth Avenue branch at 7:00 a.m.

In Lee’s hometown of Monroeville in Alabama, where the 89-year-old lives in strict privacy at a nursing home, the small community’s only secular bookstore also organized a midnight launch party. The Ol’ Curiosities and Book Shoppe is offering special editions with embossed title pages to customers who pre-order and promises a Peck impersonator will amuse revelers.

The shop says it has sold 7,000 pre-ordered copies—more than the town’s estimated population of 6,300. About half of those orders will be shipped around the United States and overseas, it says.

On Monday, an op-ed published in The Wall Street Journal by Lee’s lawyer sought to quell some of the controversy about how Watchman was discovered—after lying hidden for more than half a century—and hinted that there may also be a third novel. Tonja Carter said experts “directed by Lee” would be authenticating all documents in her safe-deposit box at a bank in Monroeville, including unidentified pages that she found last week.

“Was it an earlier draft of Watchman or of Mockingbird or even as early correspondence indicates it might be, a third book bridging the two?” she wondered.

Mary McDonagh Murphy, a writer and producer, met Lee after the author was presented with the British and U.S. editions of her new novel by publishers at a Monroeville restaurant on June 30. Murphy, whose updated film about Lee recently aired on PBS, told AFP that she briefly communicated with the novelist by writing down and holding up notes.

But despite being in a wheelchair and being “extremely hard of hearing” with poor eyesight, Lee seemed of firm mind. “Don’t be silly, of course I did,” Murphy quoted her as saying when asked if she ever thought she would see Watchman published.

The biggest bombshell for diehard fans has been that Scout’s adored father Atticus expresses racist views, a seeming fall from grace for one of America’s most loved literary heroes.

Controversy has refused to die over whether Lee, who shuns the media and suffered a stroke, was manipulated into publishing a book that she first wrote in the late 1950s. Her then editor suggested she recast the manuscript from the childhood perspective of Scout, which in turn became Mockingbird.

In a scathing review, National Public Radio called it a “troubling confusion of a novel” that reads “much more like a failed sequel” than a precursor to Mockingbird. Others have counseled people to read the book as a whole, highlighting its value as an historical document.

HarperCollins says Watchman has been published exactly as it was written, “without editorial intervention,” at Lee’s behest.

The book is a coming-of-age story that explores “racism and changing attitudes in the South during the 1950s in a bold and unflinching way,” it said in a statement. “By confronting these challenging and complex issues at the height of the Civil Rights movement, the young Harper Lee demonstrated an honesty and bravery that makes this work both a powerful document of its time and a compelling piece of literature.”