Migrant Deal Off if No Visa-Free Travel, Turkey Warns E.U. 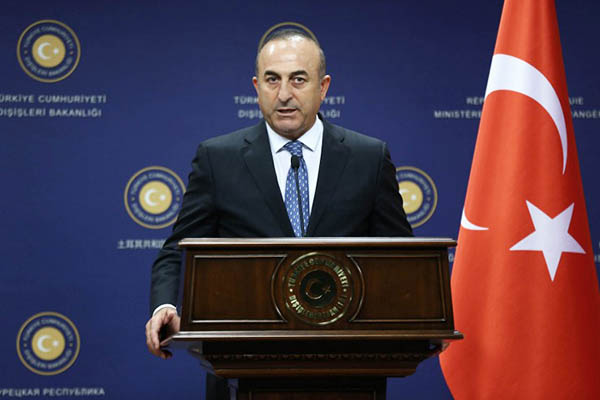 Ankara says it is committed to deal before next European Union Council meeting in July.

Ankara will abandon a deal with the European Union to reduce migrant flows if its citizens are not granted visa-free travel to most of the bloc, Turkey’s foreign minister has warned.

With the two sides locked in an increasingly-bitter standoff, Turkish Foreign Minister Mevlut Cavusoglu said it was “impossible” for Ankara to change anti-terror laws that Brussels wants to see narrowed in exchange for the visa-free travel to the Schengen zone.

“We have told them ‘we are not threatening you’ but there’s a reality. We have signed two deals with you [the E.U.] and both are interlinked,” Cavusoglu told a small group of journalists, including AFP, at the southern holiday resort of Antalya. “This is not a threat but what is required from an agreement,” he said.

Building on a threat by President Recep Tayyip Erdogan last week, Cavusoglu said Turkey would use “administrative” measures to block the deal if needed.

There have been growing concerns that Turkish nationals will not be given visa-free travel by the end of June, the target date, putting the future of the migrant deal at risk. E.U. leaders are insisting that Turkey meet 72 conditions before the visa exemption is approved, including narrowing its definition of terror to stop prosecuting academics and journalists for “terror propaganda.”

“Which definition are you talking about? Each country in Europe has different terror definitions,” the minister said, pointing to stringent measures in France.

Cavusoglu said Turkey was currently battling “more than one terrorist group” including the outlawed Kurdistan Workers’ Party (PKK). “In such a circumstance, it is impossible to change terror laws.”

Despite the increasingly acrimonious picture, diplomatic efforts will be stepped up in the coming weeks to overcome the visa-hurdle, the minister said.

In the coming days, there will be expert-level talks between Turkey and the E.U. followed by a possible leaders summit involving Erdogan, German Chancellor Angela Merkel and top E.U. officials, the minister said. “We’ll finalize the deal and make it ready before the E.U. Council meeting on July 7-8. We have the determination.”

The minister also said the deal—under which migrants can be sent back to Turkey after arriving on the Greek islands—was working “very successfully.”

“The number of migrants crossing to Greek islands in October was around 6,800. Now, it is around 30 daily,” he explained, saying it was due to the deal rather than to naval activity by NATO.

He said Turkey has so far taken in more than 400 refugees under the deal, and that 130 Syrians from Turkish camps had been resettled in E.U. member states. “We have stuck to our promise,” he said.

European concerns over the fate of the agreement grew after the shock departure of prime minister Ahmet Davutoglu, who brokered the deal with Brussels in a move which reportedly left Erdogan feeling sidelined.

Cavusoglu brushed off concerns, saying the E.U. should not use government change as an “excuse” to block Turkey’s three-decade effort to join the bloc, which has slowed for a number of reasons, one of which is the Cyprus problem.

“What is there to be concerned about with the new government?” asked Cavusoglu, referring to the cabinet headed by newly appointed Prime Minister Binali Yildirim, a staunch Erdogan ally. “Everyone is agreed on reforms, civilian constitution and the reform of institutions, in particular the judiciary.”

British Prime Minister David Cameron, who is campaigning for his country to stay in the E.U., has said the question of Turkey joining the bloc was not “remotely on the cards.”

“It’s not Prime Minister Cameron’s real opinion because Britain has always backed us,” Cavusoglu said, describing his remarks as part of a domestic campaign to counter calls for Britain to leave the bloc ahead of a referendum on the matter on June 23.