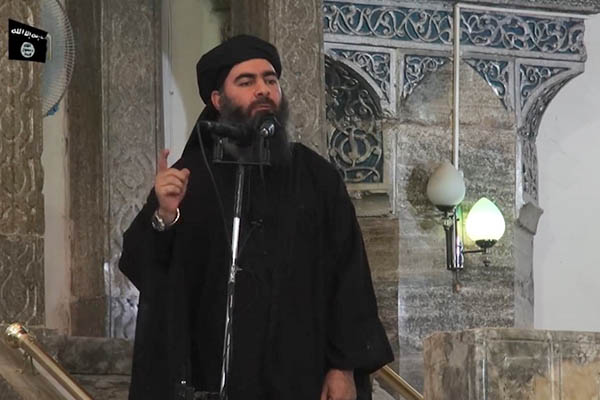 Global leaders hail Baghdadi’s death, but caution that the fight is not yet over

Islamic State group leader Abu Bakr al-Baghdadi left behind a horrific trail of beheadings, mass executions, rapes, abductions and ethnic cleansing in his five years as the self-proclaimed “caliph” of Iraq and Syria.

Here is how world leaders have reacted to news of his death.

President Donald Trump confirmed Baghdadi’s death in a U.S. raid in northwestern Syria, declaring in a televised address that he had died “like a dog.”

“He ignited his vest, killing himself… He died after running into a dead end tunnel, whimpering and crying and screaming all the way.”

“The killing of Daesh’s ringleader marks a turning point in our joint fight against terrorism,” Turkish President Recep Tayyip Erdogan said on Twitter, using an Arabic acronym for the Islamic State group. He said Turkey would “continue to support anti-terror efforts—as it has done in the past. I am confident that a decisive struggle against terrorism, in line with the spirit of alliance, will bring peace to all of humanity.”

Iran warned that this was not the end of the Islamic State group. “Baghdadi’s death is not the end of fighting Deash terrorism but just the end of a chapter,” government spokesman Ali Rabiei said in a tweet. “[I.S. terrorism] is still growing and evident. Growing via American policies and regional petrodollars, and evident in takfiri [Sunni Muslim extremist] ideology. These three sources must be extinguished,” he added.

“The defense ministry does not have reliable information about the actions of the U.S. army in the Idlib ‘de-escalation’ zone… concerning the umpteenth ‘death’” of Baghdadi, Russian defense ministry spokesman Igor Konashenkov said in a statement. He said there were “contradictory details” which raised “legitimate questions and doubts about the success of this American operation.”

“Since the final defeat of the Islamic State by the Syrian government with the support of Russian air power in 2018, the umpteenth ‘death’ of Abu Bakr al-Baghdadi has no operational significance for the situation in Syria nor for the actions of the remaining terrorists in Idlib.”

France: ‘Fight will go on’

“The death of al-Baghdadi is a hard blow against Daesh but it is just a stage,” French President Emmanuel Macron wrote on Twitter. “The fight will continue with our partners in the international coalition to ensure that the terror organization is definitively defeated. It is our priority.”

Britain: ‘Not yet over’

“The death of Baghdadi is an important moment in our fight against terror but the battle against the evil of Daesh is not yet over,” British Prime Minister Boris Johnson said on Twitter. “We will work with our coalition partners to bring an end to the murderous, barbaric activities of Daesh once and for all.”

“This reflects the united resolve of the free countries led by the United States to fight the forces of terror, the terror organizations and the terrorist states,” Israeli Prime Minister Benjamin Netanyahu said in a statement. “This is an important milestone, but it’s part of a longer battle which we must win.”

“Sleeper cells will seek revenge for Baghdadi’s death,” Mazlum Abdi—the top commander of the Syrian Kurdish force that was the U.S.-led coalition’s main ally in the fight against I.S.—told AFP.

In a tweet, NATO chief Jens Stoltenberg described the operation “as a significant step in our efforts against international terrorism. #NATO remains committed to the fight against our common enemy ISIS.”