Miley’s Back, and Front 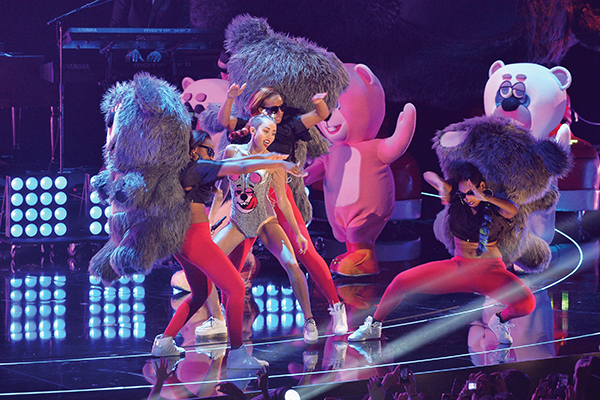 “My VMA performance had 306,000 tweets per minute. That’s more than the blackout or Super Bowl!” Miley Cyrus tweeted to her 13.4-million-plus followers on Twitter. The 20-year-old formerly wholesome Disney star’s unexpected star turn at last week’s MTV Video Music Awards made global headlines and set the Internet on fire. So bizarre was her goofy-meets-sexy performance that it upstaged the reunion of *NSYNC and out-shocked even Lady Gaga. Cyrus belted out her infectious hit “We Can’t Stop” and molested 36-year-old Robin Thicke while he sang his rapey anthem “Blurred Lines.” The semi-clad singer stuck her tongue out, gyrated wildly, slapped the butt of a black dancer, and “twerked.” That last, the Oxford dictionary helpfully explains, is to dance in a sexually provocative manner with thrusting hip movements in a low, squatting stance. Three days after her unexpected performance, social media and otherwise sober websites were still weighing in, some fulsomely, on Cyrus and the impact of her VMA antics on popular culture. There are only a few other celebrities—Madonna, Britney—who have been able to really steal the spotlight at the VMAs. By most accounts, Cyrus surpassed them all. Let’s see what she does for an encore.