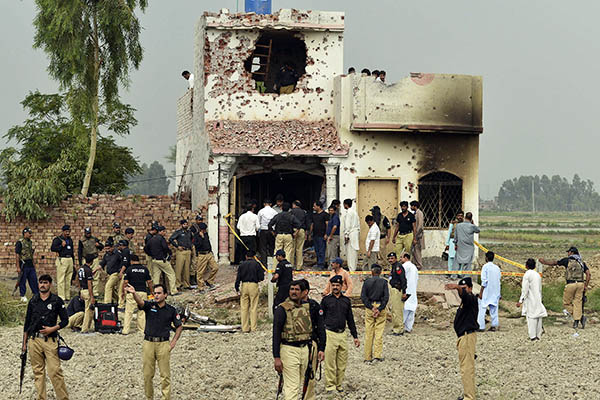 One policeman killed, three others wounded in battle with terrorists believed to be planning attack on P.M.

One policeman was killed and three others wounded in the assault at the Raiwind area of Lahore, which came as a military operation against Taliban militants in the country’s northwest enters its second month amid rising fears of reprisal attacks.

“A police team raided a house … around 2:00 a.m. on a tip off about the presence of suspected militants, but they retaliated,” said senior police official Malik Owais. “One militant was killed on the spot, while the second who was wounded and arrested later succumbed to his injuries at hospital,” added senior police official Zulfiqar Hameed.

Police took over the compound and found weapons, he said, adding that the suspects were about 20 and 25 years old and belonged to “Tafseeri Group,” a little known Islamist group.

Waqas Nazir, another police official confirmed the incident, adding that the raid took several hours because civilians had to be evacuated from the area first. Television footage showed a bullet-ridden compound with a large hole blown into one of its walls.

The Raiwind area is home to the famous ‘Raiwind Palace’—the residence of the powerful Sharif political family which also includes the chief minister of the Punjab province of which Lahore is the capital. It is also the base of the Tablighi Jamaat, a Sunni Muslim evangelical movement known for its ultra-conservative views.

Pakistan launched a long-awaited operation in the North Waziristan tribal district last month aimed at eliminating Taliban and other militant bases after a dramatic attack on Karachi airport, which marked the end of a faltering peace process with the Pakistani Taliban. More than 800,000 people have been forced to flee from North Waziristan by the offensive.

Analysts have warned that the operation would likely lead to reprisal attacks in Pakistan’s major cities at the hands of sleeper cells of militant outfits linked to the Taliban.

Also Thursday, at least six people were killed and three others injured in twin roadside bomb blasts in the restive northwest, police said. The incident occurred in the Zargari area of Hangu district in Khyber-Pakhtunkhwa province, around 60 miles southwest of Peshawar. “People gathered at the spot after the first IED exploded and then there was a second explosion that resulted in the casualties,” said senior police official Anwar Saeed.

The incident was confirmed by the Hangu police chief Anwar Khan Kundi.