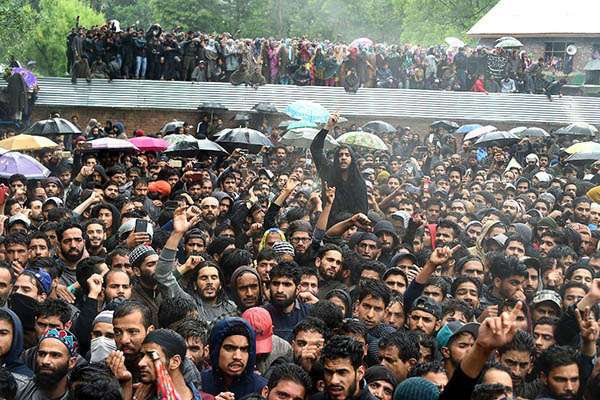 Once a member of Hizbul Mujahidden, Zakir Musa had broke away from separatist group to form Al Qaeda offshoot

Government forces in India-Occupied Kashmir killed a top militant who pledged allegiance to Al Qaeda, officials said, describing his death as a major blow to militancy in the disputed territory.

As the news of Zakir Musa’s death spread on Thursday night hundreds of protestors spilled out on the streets and clashed with government forces in many areas, including in the main city of Srinagar. Authorities cut cellular internet services across the valley and imposed a curfew in large parts of the territory to stop the protests spreading.

Musa, 25, was trapped alone late Thursday evening by soldiers and counterinsurgency police inside a hideout near the southern town of Tral and asked to surrender, a top police official told AFP. “In return he fired a grenade followed by bullets and was later killed during the ensuing gun battle,” the officer said, speaking on condition of anonymity.

Musa announced in 2017 the creation of his group Ansar Ghazwat-ul-Hind and declared his allegiance to Al Qaeda, saying in a statement that he was fighting to establish an Islamic caliphate in Kashmir. Musa dropped out of his engineering course in 2013 to join Kashmir’s largest militant group Hizbul Mujahideen fighting Indian rule and later became a part of a group led by charismatic militant Burhan Wani.

Wani’s group deftly used social media to recruit young men into militancy by revealing their faces and openly challenged Indian rule. The death of the popular militant leader in 2016 sparked wide-scale protests across the territory that lasted months and left more than 100 civilians dead and thousands injured.

Musa later took Wani’s place, but in 2017 broke away from the group to form Ansar Ghazwat-ul-Hind, which officials say was an offshoot of Al Qaeda in Kashmir. It threatened separatist leaders opposed to Indian rule if they came in his way of fighting for a caliphate.

Hizb, whose top leaders are based in Pakistan-administered Kashmir, later dissociated with Musa, most of whose associates have since been killed by government forces. “Musa was left with just one or two associates,” the police officer said.

Rebel groups including Hizbul Mujahideen have been fighting for decades some 500,000 Indian soldiers deployed in the territory New Delhi controls, seeking independence or a merger with Pakistan that administers a part of the divided former kingdom. Kashmir has been divided between the nuclear-armed rivals since the end of British colonial rule in 1947.

New Delhi regularly accuses Pakistan of supporting anti-India rebels fighting in Kashmir, a charge Islamabad denies saying it only provides moral and diplomatic support to a Kashmiri struggle for the right to self-determination.