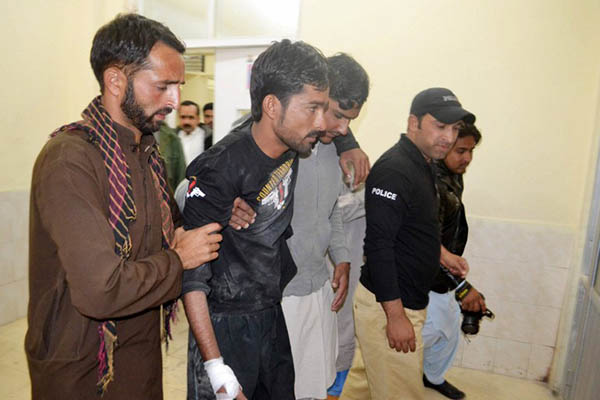 At least 60 people killed, over 100 others injured in one of the country’s deadliest attacks this year.

Three gunmen from a Pakistani Taliban-linked group burst into the sprawling academy, targeting sleeping quarters that are home to some 700 recruits, sending terrified young men fleeing.

“I saw three men in camouflage whose faces were hidden carrying Kalashnikovs,” one cadet told reporters. “They started firing and entered the dormitory but I managed to escape over a wall.”

The attack on the Balochistan Police College, around 20 kilometers east of provincial capital Quetta, began at around 11:10 p.m. Monday, with gunfire continuing to ring out at the site for several hours.

Sarfaraz Bugti, home minister of Balochistan province, told reporters there had been three attackers. “They first targeted the watch tower sentry, and after exchanging fire, killed him and were able to enter the academy grounds,” he said.

Balochistan’s provincial government spokesman Anwarullah Kakar told AFP that 60 people had died in the attack, with 118 injured, mostly minor wounds. The head of the local hospital, doctor Fareed Sumalani, confirmed that their morgue had received at least 60 bodies.

Security was tight outside the academy Tuesday morning, with media kept out of the building as a large contingent of security forces swept the area. Weeping relatives arrived at the academy and were sent to the main hospital, where authorities were starting to prepare for funerals.

Major General Sher Afgan, chief of the paramilitary Frontier Corps in Balochistan, which led the counter-operation, said “the attack was over in around three hours after we arrived.” He added that communications intercepts showed the militants belonged to the Al-Alimi faction of the Lashkar-e-Jhangvi militant group—which is affiliated with the Pakistani Taliban. “They were in communication with operatives in Afghanistan,” he said.

An emailed claim from the Pakistani Taliban, which shares close operation ties with LeJ, backed that assertion. “This attack was carried [on the instructions of] Mullah Daud Mansour, close ally of Hakimullah Mehsud and head of Pakistani Taliban in Karachi,” it said, adding four fighters took part. “This was to avenge the killing of those of our mujahideen who were killed indiscriminately [in fake encounters] outside jails in Punjab,” it said in an apparent reference to the recent surge in extrajudicial executions of LeJ fighters.

The Islamic State group also made a claim via Amaq, its affiliated news agency, and released a picture of what it said were the three attackers. It was the latest competing claim from I.S., which has struggled to gain traction in Pakistan against more established groups.

Bugti said the compound was home to some 700 recruits, hundreds of whom were rescued.

The area was plunged into darkness when the counter-offensive was launched, while security personnel threw up a cordon and ambulances zoomed in and out, taking the injured to hospitals. Military helicopters circled overhead. As the battle continued, police and civil administration officials at the site told AFP they had heard several loud blasts.

Mineral-rich but impoverished Balochistan, Pakistan’s largest province, is beset by sectarian strife, Islamist violence and an on-off separatist insurgency that has lasted for decades. The Army has also repeatedly been accused by international rights groups of abuses in Balochistan, particularly against nationalists demanding autonomy and a greater share of the region’s resources.

In August, a suicide bombing at a Quetta hospital claimed by the Islamic State group and the Jamaat-ul-Ahrar faction of the Pakistani Taliban killed 73 people, including many of the city’s legal community who had gone there to mourn the fatal shooting of a colleague.

Pakistan has been battling an Islamist insurgency since shortly after it decided to ally with the U.S. following its invasion of Afghanistan in 2001. Violence has declined in recent years following a series of military offensives in the northwest border areas as well as concerted efforts to block the militants’ sources of funding. But the remnants of militant groups are still able to carry out periodic bloody attacks, particularly in the northwest.

Balochistan is also a key region for China’s ambitious $46 billion China-Pakistan Economic Corridor (CPEC) infrastructure project linking its western province of Xinjiang to the Arabian Sea via Pakistan. Security problems have mired CPEC in the past with numerous separatist attacks, but China has said it is confident the Pakistani military is in control.