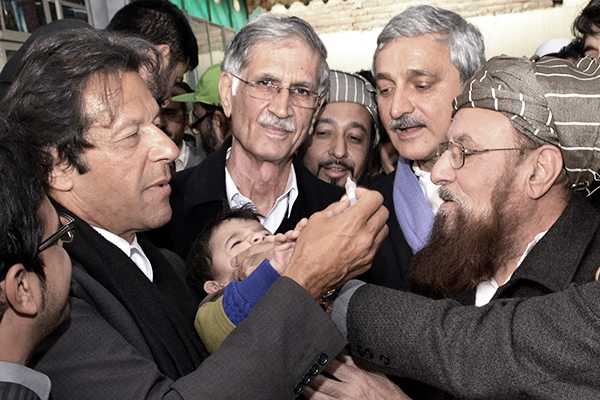 Ansar-ul-Mujahideen threatens to ‘turn our guns on’ the politicians.

“Imran Khan and Sami-ul-Haq should refrain themselves from the anti-polio campaign,” said Abu Baseer, spokesman for the North Waziristan-based militant organization. “At the moment our focus is toward Nawaz Sharif’s government, but we will turn our guns on” Khan and Haq if they do not relent, he added.

The warning came the same day that Khan—whose PTI party leads the ruling coalition in Khyber-Pakhtunkhwa province—met with Haq at Akora Khattak to appeal to the Taliban and their associates not to target health workers administering polio drops to at-risk children in the province and in the federally-administered tribal areas.

“This is against Islam, against Pakistan, and against humanity,” Khan told reporters after his meeting with Haq referring to the deadly attacks on health workers. “If we don’t eradicate polio, no country will allow entry to Pakistanis. This will deprive the poor people of Khyber-Pakhtunkhwa from finding livelihoods abroad.”

Khan has vowed to personally lead the polio vaccination campaign. He believes polio can be eradicated in three months if the campaign is not sabotaged by militants.

On Oct. 30, Haq issued a fatwa in support of polio vaccination. “According to the Shariah, there is no harm in using vaccines which medical experts recommend to save children against deadly diseases,” it read. “There is no reality in the doubts and suspicions being spread against these vaccines. Parents should give the injections and drops of these vaccines to their children to save them from fatal diseases.”

Meanwhile, 23 militants were killed by security forces late last night in North Waziristan following Ansar-ul-Mujahideen’s suicide attack earlier in the day on a mosque in Mir Ali that claimed the lives of four troops and injured 28 others. The militant group said the suicide attack was in retaliation for Pakistani Taliban Hakimullah Mehsud’s killing on Nov. 1. “It’s just the beginning,” said spokesman Baseer of the mosque attack. “The end will be worse.”

mr taliban,your end is indeed worse.these terrorists do not have the guts to fight army headon.attacking soldiers while praying,in their quarters or attacking civilians is the hallmark of your jihad.what religion do you represent.i am sure its not islam.so fear your own end,because when pak military moves in,you will run away or die just like in 6 out of 7 agencies.