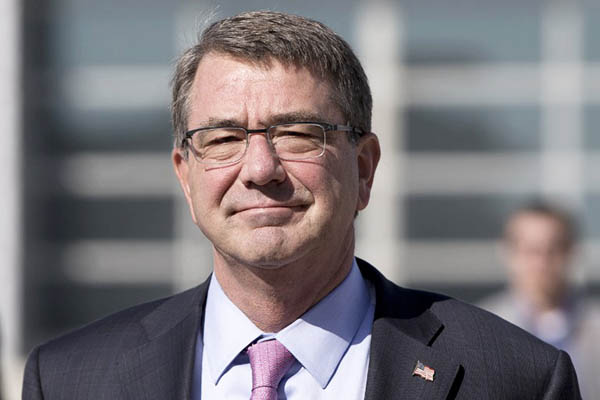 Coalition against Islamic State hopes to defeat the extremists by targeting their ‘ideological’ centers.

Raqa in Syria and the Iraqi city of Mosul are in the U.S.-led coalition’s crosshairs as it tries to build on recent successes against the Islamic State group, Pentagon chief Ashton Carter said Wednesday.

Speaking to troops at Fort Campbell, Kentucky ahead of their deployment to Iraq, Carter said the recapture of the two cities, each emblematic of I.S. power, is key to the ongoing fight against the jihadists.

Raqa and Mosul “constitute ISIL’s military, political, economic, and ideological centers of gravity,” Carter said. “That’s why our campaign plan’s map has got big arrows pointing at both Mosul and Raqa. We will begin by collapsing ISIL’s control over both of these cities and then engage in elimination operations throughout other territories ISIL holds in Iraq and Syria,” he added, without giving a timeframe.

Though the Pentagon has repeatedly ruled out large-scale deployments to either country, it has gradually been increasing the number of special operations troops available to carry out raids and to train local forces. Carter said a small contingent of special operations troops had recently made contact with local partners in Iraq. The troops can also conduct raids across the border in northern Syria.

“While I cannot give you specifics, I can tell you these forces have already established contact with new forces that share our goals, new lines of communication to local, motivated and capable partners, and new targets for airstrikes and strikes of all kinds,” Carter said.

Islamic State fighters seized Raqa in early 2014 and declared it the capital of their so-called caliphate. In June the same year, the jihadists seized Mosul. Another major Iraqi city, Ramadi, fell in May 2015 but local Iraqi forces, backed by coalition air support and troop training, recaptured the town at the end of last month in what was seen as a major blow for the jihadists.

Since coalition airstrikes began in August 2014, the Pentagon estimates the group has lost about 40 percent of the territory it once held in Iraq, and about 10 percent of the land it claimed in Syria. “We can see that our actions to accelerate the campaign are having an effect, and creating opportunities to do even more,” Carter said.

The defense secretary will meet next week in Paris with military officials from France, Australia, Germany, Italy, the Netherlands and Britain. “Each of these nations has a significant stake in completing the destruction of this evil organization, and we must include all of the capabilities they can bring to the field,” he said.

He said other countries in the approximately 60-member coalition should do more to fight I.S., which Carter likened to a metastasizing cancer. “America will continue to lead the fight, but there can be no free riders,” he said. “That means that as we invest in the acceleration of the campaign, so must every one of our coalition partners and every nation in a position to help.”