Military Ops Against TTP to Continue till Menace Wiped Out: DG ISPR 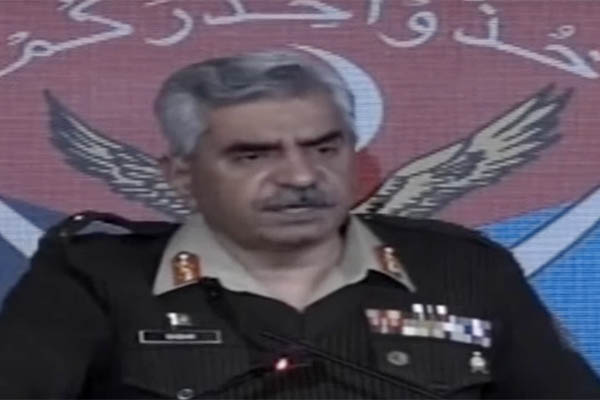 Following the end of a ceasefire agreement between Islamabad and the banned Tehreek-e-Taliban Pakistan (TTP) on Dec. 9, the military has resumed operations against the extremist group and will continue to target it until the “menace” has been wiped out, military spokesman Maj. Gen. Babar Iftikhar said on Wednesday.

“As far as our talks with the TTP are concerned, they are on hold and [military] operations are continuing,” he said during a wide-ranging press conference in Rawalpindi. “It [ceasefire agreement] was a confidence-building measure taken to actually go into talks with the violent non-state actors on the request of the current Afghan government,” he said, adding that it had been suggested by the Afghan Taliban leadership as an option to prevent the TTP from using its soil against Pakistan.

“Obviously, you would understand that TTP is also not a monolith, they have some internal differences. So, there were some problems, some conditions that were non-negotiable from our side,” he said, stressing that with the conclusion of the ceasefire the military had resumed its operations against the extremists. “We are conducting operations every day, and will continue doing so till the time we get rid of this menace,” he added.

Responding to a question on recent videos purportedly showing Taliban commanders demolishing the fence along the Pak-Afghan border, Maj. Gen. Iftikhar stressed that the initiative was intended to protect the people on both sides as well as to regulate trade. “The fence on the Pak-Afghan border is needed to regulate security, border crossing and trade. The purpose of this is not to divide the people, but to protect them,” he said, as he acknowledged that the security situation along the Western border had remained “challenging” during 2021.

Noting that the Pak-Afghan border fencing was 94 percent complete, the director-general of the Inter-Services Public Relations (ISPR) said the work would be completed and made more effective. “The blood of our martyrs was spilled in erecting this fence. It is a fence of peace. It will be completed and will remain,” he added.

The military spokesman said 67 new wings of Frontier Corps Balochistan and Khyber Pakhtunkhwa had been established in 2021 to further strengthen border security, adding the process was underway to establish six more wings.

To a question on whether the government had protested to the Afghanistan government about the attempts to dismantle the fence, Iftikhar reiterated that western border management had “local and strategic dynamics.” Blaming the recent incidents on “one or two localized problems,” he said the issue was being discussed by the governments of both countries. “We have very good relations. We understand each other and keep talking about different issues that keep surfacing. There is no problem, fencing is underway and will continue,” he added.

The DG ISPR also rubbished rumors of a “deal” between the security establishment and former prime minister Nawaz Sharif, saying this was “baseless” speculation. “If anyone is talking about a deal, please ask them who is doing the deal. Where is the evidence of such a deal. There is no such thing,” he claimed.

Likewise, he maintained that civil-military relations in the country had “no issues” and the armed forces remained subservient to the government and worked according to its directives. “There is nothing more to it,” he said and urged the media to avoid linking the establishment to politics. “There are more issues to discuss in this country, such as health and education, population growth, agriculture … please keep us out of it,” he added.

Maj. Gen. Iftikhar’s press conference coincided with Kashmir’s Right to Self-Determination Day and he initiated his briefing with an update on the situation along the Eastern border. Thanks to the ceasefire agreement reached with India in February 2021, he said, the Line of Control (LoC) “remained peaceful throughout the year” and there was a “definite improvement” in the lives of local residents.

“But alongside this, the false accusations and the propaganda by the Indian leadership that has continued points towards a particular political agenda,” he said, alleging that this was designed to divert global attention from the “systematic demographic changes” Delhi was implementing in India-held Kashmir.

He said the “whole” world was now aware of India’s drive toward religious extremism, adding it was also endangering the entire region’s security situation with its defense procurement. This, he warned, risked shifting the balance of traditional warfare and provoking an arms race that would negatively impact peace. He also rubbished India’s claims of infiltration from Pakistan as laughable.

“Recently, the Indian army staged a fake encounter in Kirin sector which is front of Neelum Valley, and in the name of countering infiltration, martyred an innocent Kashmiri, and then blamed Pakistan for it,” he said, adding that the photos circulated by Indian media of the alleged terrorist had been proven false as the accused was not only alive but at home in Pakistan-administered Kashmir.

Referring to the Russell Tribunal on Kashmir, held from Dec. 17 to 19, 2021, he said its findings were “eye-opening,” with 15 international judges and experts examining the genocide, decolonization, secular colonialism and war crimes against Kashmiris. He said the participants had specifically cited reports by Amnesty International and Human Rights Watch that had recorded instances of human rights violations by India and how Indian armed forces have been waging a military, political, economic, social, and cultural war against Kashmiris. This, he maintained, was in violation of the Geneva Convention and other international laws.

He said Jan. 5 was an important day, as it on this date in 1949 that the people of Kashmir were promised the right to self-determination by the United Nations. “That promise remains unfulfilled,” he said. “We salute the everlasting struggle, and their unparalleled sacrifices and courage of the Kashmiri people.”

Maj. Gen. Iftikhar also summarized the armed forces’ performance during 2021, noting that the ongoing Operation Raddul Fasaad had seen 60,000 intelligence-based operations that had helped dismantle terrorist networks. “In 2021, intelligence agencies issued 890 threat alerts, on the basis of which 70 percent incidents were averted,” he said. “The masterminds and their facilitators were unmasked,” he added. “In tribal areas, more than 70,000 mines … were recovered and lives were saved. Many officials were injured and martyred during the process,” he said, adding that 248 troops had been martyred. “We salute them and their families. [Their sacrifices] helped establish peace,” he added.

The military spokesman regretted the presence of a “campaign” against national institutions that he alleged was intended to create a “gulf” between the public and the institutions and “damage people’s trust.” He said the armed forces were aware of these efforts. “[Those] who spew half-truths, fake news and false propaganda to target institutions and damage the country have failed and will always fail,” he added. Similarly, he said, attempts to sabotage the China–Pakistan Economic Corridor had also failed.

On the National Action Plan against terrorism, Maj. Gen. Iftikhar said action had been taken against 78 terrorist organizations. “If we continue implementation of the National Action Plan, we can seize control of extremism. Especially those clauses that pertain to sectarianism and hateful content. It is with their implementation that harmony and tolerance can be established in society,” he said. “The ulema and media have also played their part. In Pakistan, no group or person can be allowed to take the law in their hand. Only the state can exercise this power,” he added. The spokesman also praised security teams and polio workers for continuing the country’s campaign despite threats to their lives.

“2022 also marks 75 years of our independence,” he said of the year ahead. “We have faced many challenges and we have to play our part in making the country prosperous.”