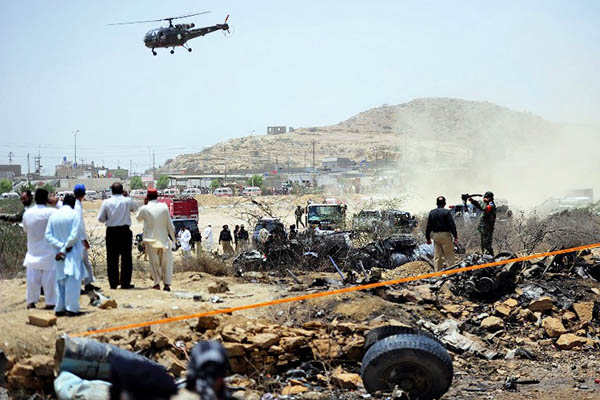 Wreckage at the site of an Air Force crash near Karachi, June 2014. Asif Hassan—AFP

Air Force spokesman says crash did not cause any other loss of life or property.

A pilot with the Pakistan Air Force was killed when his plane crashed near Karachi, officials said late Friday.

“Squadron leader Tanveer Ahmed embraced martyrdom when a Mirage aircraft crashed near Gadap Town around 30 nautical miles from Karachi,” said Air Commodore Tariq Mehmood, a spokesman for the Pakistan Air Force. He said the pilot was on a routine night operational training mission when the accident happened.

Mehmood gave no reasons for the crash and said an inquiry committee had been formed to investigate the causes of the accident. He said no loss of life or property was reported from the ground.

Rao Anwar, a senior police official who visited the crash site, said human remains were scattered at the site of the crash. “It seems the plane caught fire before it crashed into the ground, pieces of human organs are scattered around the place,” he said.

In June this year, a Pakistan Air Force fighter plane crashed at a bus terminal on the outskirts of Karachi killing four people, including both pilots.