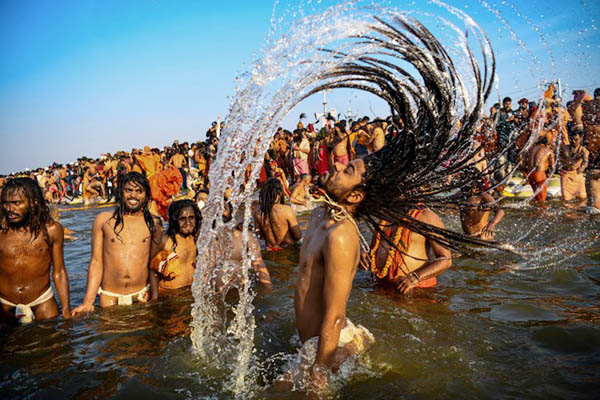 More than 20 million Hindu pilgrims ritually bathed in India’s holy rivers on the opening day of the Kumbh Mela, a gigantic festival billed as the world’s largest human gathering.

The spectacular seven-week festival began Tuesday in Allahabad, an ancient city that rises alongside the Ganges, Yamuna and mythical Saraswati rivers in northern Uttar Pradesh state. The meeting point of these rivers is considered among the holiest places in Hinduism and devotees believe bathing there during the Kumbh helps cleanse sins and brings salvation.

Uttar Pradesh Chief Minister Yogi Adityanath, whose Hindu nationalist government is overseeing the enormous event, said 22.5 million Hindus plunged into the icy waters on the first day of the Kumbh. “I thank all the visitors, religious leaders, common man and officials for the smooth conduct of the mega event,” he told the Press Trust of India news agency on Wednesday.

Adityanath, a firebrand Hindu priest who rose to lead India’s most populous state in 2017, said the opening day figures were “a record” for the centuries-old festival.

The Kumbh attracts astonishing numbers of visitors, outstripping the Haj pilgrimage to Mecca or any other large-scale gathering. Kumbh organizers say the last major gathering in Allahabad in 2013 drew 120 million people—nearly the population of Japan.

Nearly 30,000 police have been deployed to oversee crowds for the huge undertaking, and prevent stampedes that have marred previous gatherings.

A gigantic tent city has emerged near the banks of the hallowed rivers with a 45-square kilometer encampment set aside specially for pilgrims.

Adityanath, who hails from Prime Minister Narendra Modi’s Bharatiya Janata Party, has heavily promoted this year’s festival, which comes as India prepares for a general election due by May.

The historic city of Allahabad was even renamed Prayagraj in October by the state’s conservative government, stripping its centuries-old name and replacing it with an ancient Hindu title. But it is still widely known as Allahabad, the name given by Islamic rulers that reigned over India hundreds of years ago.

The Kumbh, which runs until March 4, was recognized as an intangible cultural heritage by UNESCO in 2017.