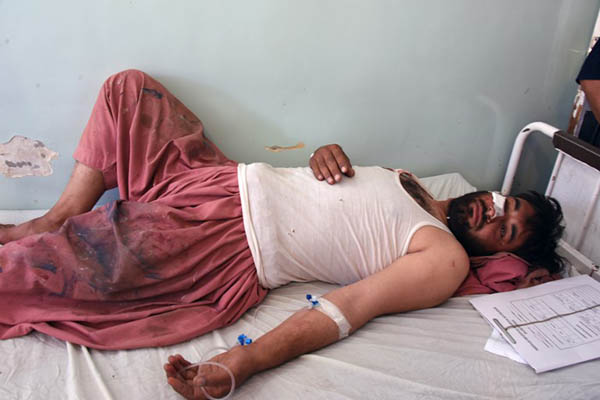 At least 16 killed, 38 wounded by blast at bus station

At least 16 people were killed and 38 wounded on Tuesday when a minivan packed with explosives exploded as members of the security forces were trying to defuse it in southern Afghanistan, officials said.

Police and intelligence officers in the city of Kandahar had already cleared the area around a bus station where the van was found, said the provincial governor’s spokesman Daud Ahmadi. “As the security forces were trying to defuse the van, it detonated,” said police spokesman Mohammad Qasim Azad.

“The latest figures show 16 dead and 38 wounded people brought to the hospital. We still have two ambulances at the site because there might be more people under the rubble,” said Dr. Nehmat Barak, chief of the Mirwais Hospital in Kandahar.

“When I was going to my shop the area was closed by the security forces,” one witness who did not give his name told AFP. “I was waiting for the way to be opened when a big explosion happened and I escaped from the area. My co-workers who were already in the shop have disappeared and I have no news about what happened to them.”

Another witness said he was inside his shop when the explosives detonated. “I found myself among smoke and bloodstains and saw my hand broken,” he said.

Ahmadi said security forces also found a large container of explosives, rocket-propelled grenades, suicide vests and ammunition near the site. “The terrorists planned to conduct a big attack at the end of Ramzan in the city among crowds of people as they went out shopping for Eid… security forces prevented a disaster from happening,” one security official told AFP.

No group immediately claimed responsibility. The blast was quickly condemned by President Ashraf Ghani, who praised the “brave” officers who dealt with it.

The Taliban are stepping up their spring offensive across the war-torn country. Late Monday the insurgents attacked two districts in the southeastern province of Ghazni, briefly capturing the police headquarters in one of them before being pushed back, said governor’s spokesman Aref Noori. He said 16 members of the security forces had been killed in the fighting and the Taliban also suffered “heavy” losses, with sporadic clashes continuing on Tuesday.

Last week the militants attacked the western city of Farah but were driven back by commandos supported by the Afghan and U.S. Air Force.

On Monday, the Taliban warned Kabul residents to avoid “military centers” in the heavily fortified city, saying they are planning more attacks there.

A U.S. government watchdog also warned Monday that upbeat assessments of improving security in the country did not match facts on the ground.

The Pentagon’s Office of the Inspector General said there were “few signs of progress” in the fight against the Taliban.

Top US officials and military commanders insist that Afghan police and troops—who have suffered thousands of casualties and are beset by low morale and corruption—are now doing a better job. But the Taliban still control swathes of the country and are staging repeated attacks, while the Islamic State group has conducted a series of high-profile suicide blasts in Kabul and elsewhere.