Misbah Believes Team Can Rebuild for 2015 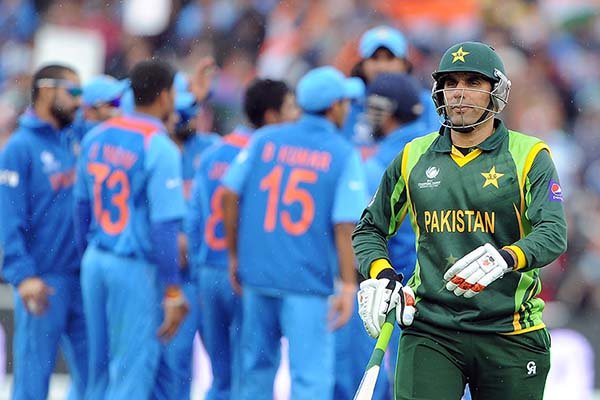 New team will be announced for upcoming series in West Indies.

Skipper Misbah-ul-Haq put on a brave face on Monday for Pakistan’s miserable collapse at the Champions Trophy, believing the national cricket team can overcome serious weaknesses to rebuild for the 2015 World Cup.

Pakistan crashed out of the eight-team Champions Trophy last month, losing all three matches as their batsmen flopped once again.

But 39-year-old Misbah, who top-scored in the Trophy with 173, was confident the team could bounce back. “If we have lost then it’s not the end, we can rebuild the team in the next two years for the World Cup by working on good players,” Misbah told reporters on his return from England.

Apart from Misbah, all other top-order batsmen flopped with opener Mohammad Hafeez scoring 38 runs in three matches, Asad Shafiq 41, Shoaib Malik 25, and Kamran Akmal 23 at the Trophy held in England.

Misbah conceded changes in the team ahead of their five-match, one-day and two Twenty20 international series in the West Indies later this month. “We have to sit down and discuss, make changes where necessary and plan who are the players to be groomed for the future,” said Misbah, who will retain his position as captain for the one-day series staring in Guyana from July 14.

Misbah denied there was any rift in the team following the poor performances.

“Whenever the team loses such negative things come up but there are no differences because these are the same players who did well recently,” said Misbah.

Pakistan has now lost four of its last five one-day series under Misbah. The skipper said that as captain and as a Pakistan cricketer he was “deeply disappointed” with his team’s showing in the Champions Trophy.

“We are playing all our cricket outside Pakistan and that is also one of the reasons we are suffering,” said Misbah of the lack of home series due to Taliban and Al Qaeda-linked attacks.

Pakistan has been forced to play at neutral venues since militants attacked the Sri Lankan team bus in March 2009, ending all foreign tours to the country.

Misbah also said batsmen needed to lift their standards. “Conditions in England were tough and our batsmen couldn’t handle that, but we have to address that problem sooner rather than later,” he said.

Pakistan is expected to appoint former captain Inzamamul Haq as batting consultant after their experiment with Australian coach Trent Woodhill in the Trophy failed to produce desired results.

Misbah said he would sit with selectors to finalize a team for the West Indies tour. The team is due to be announced on Wednesday.