Home Lightbox Misbah to Fight On After Australia Loss

Misbah to Fight On After Australia Loss 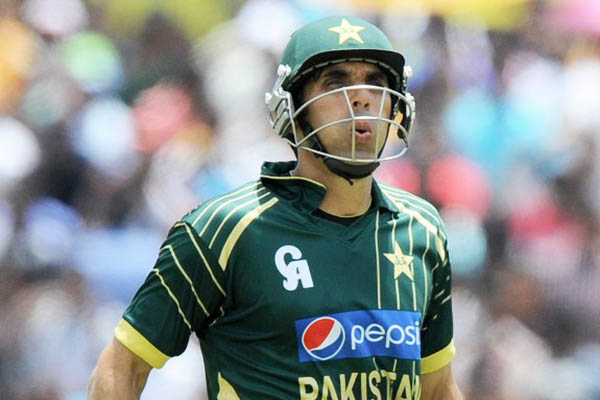 Pakistan captain says he hopes the team will win final match on Sunday to boost confidence.

Pakistan skipper Misbah-ul-Haq vowed to fight on despite losing the one-day series against Australia, insisting he has not thought about relinquishing the captaincy.

Pakistan went down by five wickets in the second day-night international in Dubai on Friday, handing Australia an unbeatable 2-0 lead in the three-match series. The defeat added further pressure on the embattled Pakistan captain, as former greats demanded he be sacked.

The Pakistan Cricket Board appointed Haq as one-day captain until the World Cup in Australia and New Zealand in February-March next year. Asked if he was thinking of standing down, Haq said: “I have not thought about the captaincy. I will fight on.”

Pakistan were bowled out for 215 after having been well set for a 250-plus total as they lost their last nine wickets for just 89 runs. Pakistan openers Sarfraz Ahmed (65) and Ahmed Shahzad (61) had put them on a solid footing of 126 runs for the first wicket.

Under-performing Haq was run out in the 34th over for 15 on Friday after getting out for a first-ball duck in Pakistan’s 93-run defeat in the first match in Sharjah on Tuesday. “The batting has let us down and we need to put things right before the World Cup—if we don’t, then its trouble,” said Haq. “You really want to improve your performance from game to game and the Test matches are just around the corner. We need to improve our batting and if we are playing against a top side then we need to put a good total on the board, otherwise you don’t have any chance.”

Haq said he hopes the team can win the final one-dayer in Abu Dhabi on Sunday. “It’s an important game for us. We need to go into the Tests with a win and that will lift our confidence,” said Haq.