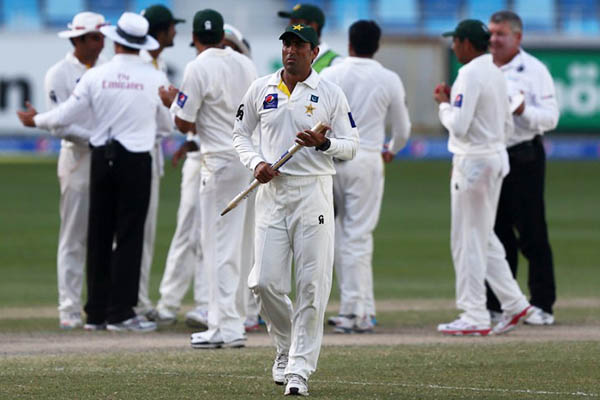 Pakistan cricket captain Misbah-ul-Haq hailed his team’s first Test victory over Australia in Dubai on Sunday as “one of the finest wins” but added his team needed to remain focused to win the series.

Pakistan thrashed Australia by 221 runs on the fifth and final day with just 21.5 overs remaining in the game. Australia were dismissed for 216 after left-arm spinner Zulfiqar Babar took 5 wickets for 74 runs and leg spinner Yasir Shah finished with 4 wickets for 50 runs to give Pakistan a 1-0 lead in the two-Test series.

Haq said the win was the second best behind a 3-0 rout of the then world number one team England in the United Arab Emirates in 2012. “It’s difficult where to rank this win but it is one of the finest victories,” he said after the match. “I always rank 3-0 against England at the top but after that this is a big achievement, also as captain. We will try to do this again and try to focus more and are determined not to be lazy against a team like Australia who always look for an opportunity,” he added.

Pakistan will look to win or avoid defeat in the second Test, starting in Abu Dhabi on Oct. 30, to seal their first series victory against Australia since 1994.

Haq said the win was an achievement in the context of Pakistan’s 2-0 defeat in Tests in Sri Lanka and 3-0 humiliation in the preceding one-day series against Australia.

“Of course, a victory against any side is always important in a Test, especially against Australia and in the context that we were playing before, the last series [in Sri Lanka in August] then we lost the one-days and the Twenty20 and also not having your regular players here,” said Haq.

Haq said it was frustrating not to get wickets in the second session when Mitchell Johnson (61) and Steven Smith (55) added 65 for the eighth wicket. “Of course, you want to finish such games early. I was a bit worried as captain and it worries the coach also, because if it goes till the end then its a worry for us, we missed four chances but that’s cricket and you have to forget that and you have got to have belief that you can do it and the boys made it,” said Haq, who praised Younis Khan, the man-of-the-match.

“He is a legend,” said Haq of Khan, who made twin centuries in the Test. “He is a role model for the youngsters.”

Australian captain Michael Clarke felt his team has improved against spinners since their 4-0 routing in India last year. “Unfortunately the result is the same as what it was in India. But I think as a team in general we’ve improved out of sight since that series, for a number of reasons,” said Clarke, who flopped in both innings with two and three.

Clarke promised his team would hit back in the second Test. “Any time we lose a game it breeds fire in your belly. We don’t like losing, Australians in general don’t like losing. We’ve got a couple of days now to prepare as well as we can and we’ll look forward to that second Test match. We got outplayed and Pakistan deserves a lot of credit for the way they played over the whole five days. We know we can play a lot better and look forward to showing that in the second Test match.”