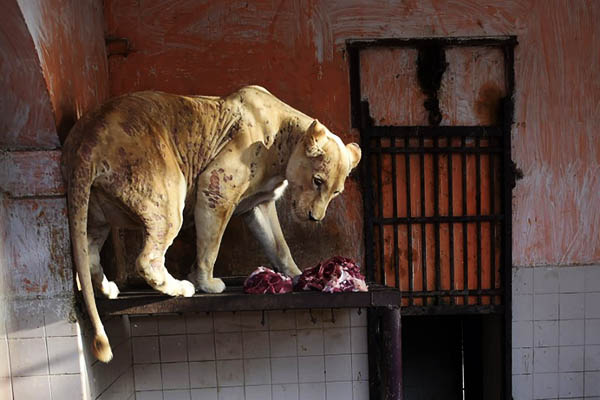 Shortage of vets feeds rise of disease, injury among animals at Karachi zoo

A white African lioness stares blankly at the spectators crowded outside her small, steel-barred cage, her extraordinary coat dotted with numerous spots, the result of a fungal skin disease that has marred her once pristine fur.

The ailment is curable—or, rather, it should be. But at the Karachi Zoological Garden there are not enough vets to give proper treatment to its more than 850 animals, many held in cages built over a century ago.

“Here we have a mere two veterinaries and three paramedics. They are not at all sufficient,” said the zoo’s chief, Mansoor Ahmed Qazi.

Management have been pushing the city council to approve a third veterinary position for the zoo’s population, including lions, tigers, elephants, chimpanzees, birds and reptiles. But the council has usually focused more on sewage, roads, and garbage removal in the chaotic port megacity of some 20 million people, which until recently had been rocked by years of political and ethnic violence.

“This is unfortunate, that the zoo is heavily understaffed and thus not able to take good care of the animals,” said Humaira Ayesha, an expert from the World Wild Fund for Nature (WWF) in Karachi.

Unfortunately the problem is not limited to Karachi.

Islamabad’s zoo has long been criticized for its treatment of its lone elephant, Kaavan, which became the subject of a high-profile rights campaign backed by music icon Cher in 2016 after it emerged the animal was being kept in chains.

And the zoo in Peshawar, which opened in February, has admitted that 30 animals so far have died while being transferred or in quarantine, including three rare snow leopard cubs.

“Peshawar Zoo is very understaffed, and those we have are untrained,” spokesman Naimat Khan told AFP.

There is little legislation in Pakistan to help support animal welfare. The most recent law on the books addressing animal cruelty dates from 1890. Such little legal recourse “makes it difficult for the country to improve animal welfare standards in its zoos,” Ayesha of the WWF said. 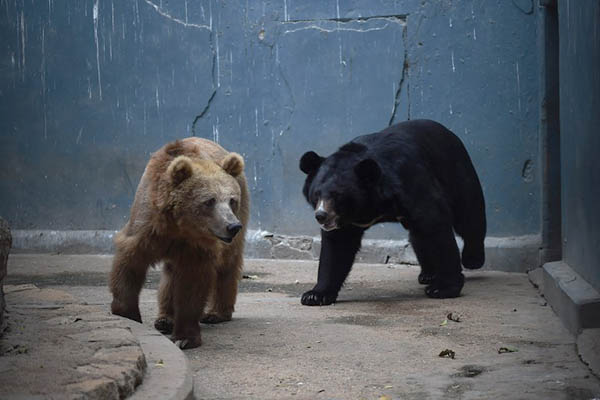 At the Karachi Zoological Gardens, shops have encroached on the zoo property, still dotted with centuries-old tamarind, banyan and ficus trees. “Stones and garbage from the shops are thrown into the animal enclaves. That amounts to cruelty,” Faheem Zaman, a former chief of Karachi Metropolitan Corporation, says.

Visitors also throw things into the animals’ cages. An official recalled that a spectator once threw a handkerchief knotted with a steel wire towards an ostrich, which gulped it down. “The long neck of the ostrich was badly damaged and we had to operate,” says Abida Raees, a zoologist and deputy chief of the zoo.

At least one young chimpanzee, Raju, has been known to unwrap juice boxes thrown to him by visitors and drink from the plastic straw.

Raees said the zoo appealed to visitors not to feed animals but an AFP reporter could see no such signs on display.

However efforts are finally being made to revamp the northwest portion of the facility to make it more “humane and animal friendly,” replacing the enclosures with large wet and dry ones that are far closer to the animals’ natural habitat.

Zain Mustafa, a consultant to the government, and his team surveyed and studied eight zoos in different countries including the United States, Germany, Singapore, and India, drawing from what they saw to plan the renovations in Karachi.

Work appears to be going on in fits and starts, with little chance of being completed by the 2019 deadline, but he hopes the new enclosures when finally complete will provide a more suitable home for the animals. “The old Victorian concepts of keeping wild animals for exhibition, as a toy, or amusement is over now,” said Mustafa. “Studies tell us that the animals have emotions, they feel loneliness and depression if kept in captivity and an unnatural environment.”