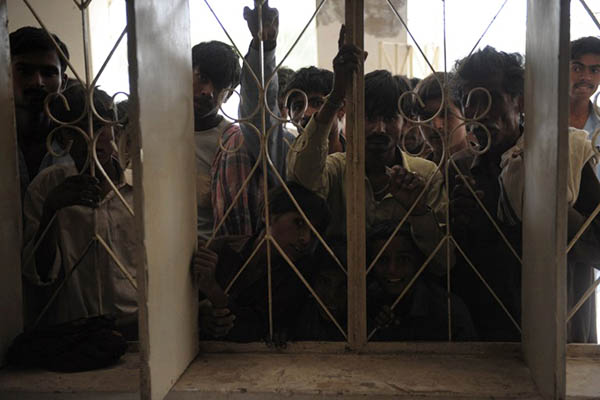 Two-month-old Mangal succumbed to pneumonia on Tuesday in Mithi, the latest victim of a deadly web of drought, disease and malnutrition in one of Pakistan’s most deprived regions. Her father Buru had held a plastic tube supplying oxygen into her tiny nostrils all night, but his silent prayers were not enough.

She died in a government hospital in Mithi, the main town of Tharparkar district, becoming one of at least 67 children to die of poverty-driven disease in the area since December. “She was in a very serious condition and we had advised her father to get her to a bigger hospital in Hyderabad city,” said Dr. Mohanlal Khatri of the Mithi hospital. “Most of the children are brought here with pneumonia, diarrhea, low birth weight and neonatal sepsis.”

The unfolding tragedy has grabbed the attention of the national media but aid remains scarce a day after Prime Minister Nawaz Sharif and Bilawal Bhutto Zardari, son of the late premier Benazir Bhutto, visited the area.

Thar desert, which begins around 300 kilometers east of Karachi and runs up to the border with India, is dominated by subsistence farmers who depend on beans, wheat, and sesame seeds for survival, often bartering surplus in exchange for livestock. It has been hit by a rainfall deficit of roughly 30 percent between March 2013 and February this year, according to government data, with the worst-hit towns of Diplo, Chacro and Islamkot barely touched by a drop of water for months.

At an Army-run camp in Mithi, women dressed in the yellow, red and blue dress typical of the region’s Hindu community, waited in a line for relief which many said was hard to come by. “Please get me a food permit, I have been coming here since yesterday but in vain,” one woman pleaded.

Hindus, a small minority in Pakistan’s overwhelmingly Muslim population of 180 million, have been the worst affected by what is happening in Tharparkar. “Of all the children we treated 75 percent were from the Hindu community,” said Khatri, the doctor in Mithi.

Much of the aid so far has been provided by the charity wing of banned Islamist outfit Jamaat-ud-Dawaah, whose head Hafiz Saeed is wanted by India for allegedly masterminding the Mumbai attacks. Hafiz Abdul Rauf, who heads the organization in the area, said that the primary cause of the deaths was the grinding poverty that has afflicted the area for decades.

An outbreak of sheep pox has aggravated the situation, according to residents who depend on livestock as a form of saving, selling an animal when money is needed for a special occasions such as weddings. “We had 300 sheep, (but) because of ‘Mata’ (sheep pox) and drought, 150 of them died over the past two months,” said Bheer Lal, 30, from one of the affected villages. “Our life depends on the livestock and now they have gone our life is at stake.”

Madan Lal, a senior official with the Sindh livestock department, said that 12 vaccinating teams had been sent out to treat livestock on a “war footing.” Sono Khangrani, the head of Thardeep Rural Development Program, an NGO working in Thar, warned the situation could deteriorate as spring gives way to the hot summer.

“Thar will see worse conditions in coming days. Hot weather will increase the drought in April, May and June,” he said. “Thar has been facing this problem for years and years but this time the media highlighted the issue and forced the government to respond.”