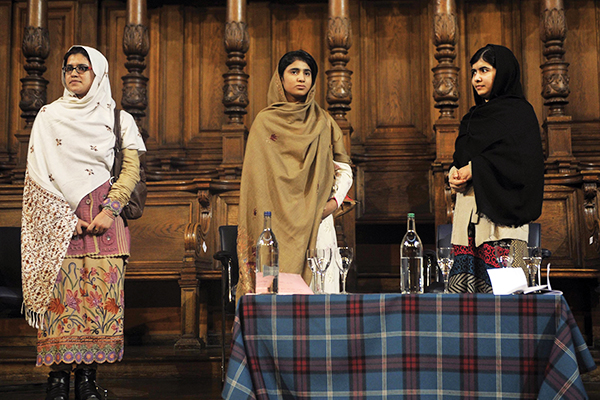 Pakistanis and non-Pakistanis alike were disappointed when the Nobel Committee confirmed media leaks through its official announcement on Oct. 11 by awarding the 2013 Nobel Peace Prize to the Organisation for the Prohibition of Chemical Weapons instead of 16-year-old education activist Malala Yousafzai. (We had prematurely congratulated Malala in our previous issue, which went to publication prior to the Oslo announcement.) Malala had already said, self-effacingly, that she did not deserve the honor. Her consolation prize was a meeting with Barack Obama and his family at the White House (which she used to win over Pakistanis all over again by imploring the U.S. president to stop drone attacks), a meet-and-greet with Queen Elizabeth II in London, and an honorary citizenship from Canada. She also received an honorary doctorate from Edinburgh University, where she reunited with Kainat Riaz and Shazia Ramzan, her schoolmates from Swat also wounded in last year’s Taliban attack on their school van. But a second Nobel for a Pakistani is not a far stretch even now. “Malala is an outstanding, courageous woman,” said Thorbjørn Jagland, chairman of the Nobel Committee. “She will certainly be a candidate for future years.”