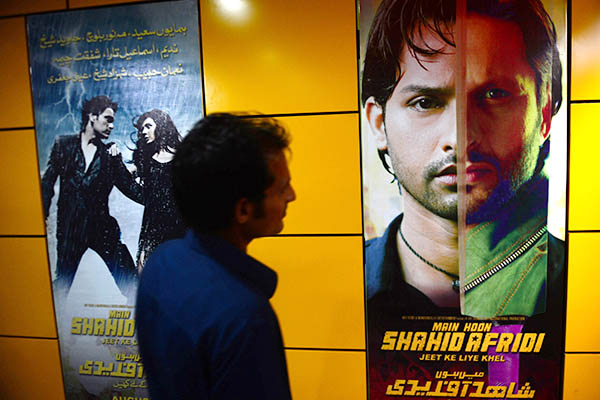 A local film about a boy emulating the fairytale career of cricket star Shahid Afridi hit cinemas Friday despite objections from the player over “obscene” scenes he fears could damage his image.

The $1 million Pakistan-made movie Main Hoon Shahid Afridi (I Am Shahid Afridi) tells the story of a young man who dreams of becoming as great a player as Afridi, and the trials he faces as he tries to follow in his hero’s footsteps.

The big-hitting all-rounder had given his blessing to the producers, but last week reacted angrily to an “obscene” scene shown in trailers for the film in which the hero hugs and kisses a girl in a nightclub.

He also raised objections to an “item song,” a musical performance featuring Pakistani actress Mathira Khan. Dance numbers such as this with scantily clad women are often used in Indian cinema and have little to do with the story.

“I had given permission for the film with an aim to give kids some positive healthy entertainment, to divert their minds toward cricket and it should not have obscene things,” said Afridi, 33. But the filmmakers went ahead with the release without removing the scenes.

“The item song was the demand and if Afridi had any objections, it’s his mindset,” Mathira told reporters at a private premier of the film on Wednesday night.

Cinemagoers had mixed reaction to the movie.

“I don’t see any obscenity in the film,” said 27-year-old shopkeeper Liaqat Khan. “If we can watch Indian movies in our cinemas which are full of objectionable scenes, why can’t we watch this film.”

But middle-aged housewife Samina Ali said she was embarrassed after watching the movie. “I came here on the insistence of my kids who are diehard fans of Afridi, but this film cannot be watched with kids,” she said.

Afridi, who hails from Pakistan’s deeply conservative tribal district of Khyber on the Afghan border, has so far played 27 Tests, 354 one-days and 59 Twenty20 matches for Pakistan. He became an instant hero when he hit a 37-ball century in only his second one-day against Sri Lanka in 1996—still a world record. Afridi also holds the record for hitting the most sixes in one-day international cricket, with 308 in 354 matches.

Pakistan’s film industry has been on the skids for years, unable to compete with India’s Bollywood. But filmmakers are hoping the phenomenal popularity of one of the country’s best-loved cricketers will translate into takings at the box office.

I have watched and loved that movie yesterday. Butt if bad scenes will not be r
Shown in paki movies. Then peoples will come with families and these movies will earn more money.

if you have problems with vulgarity….just go to a mosque or Makkah. Dont come to cinemas. Its a haram activity. By coming to the cinemas you are by default, defyng the islamic teachings and entering the grey area of infidelity and sin.

Dont be in any denials…..once you reach the cinema, you aint a muslim no more so stop whining about the obscene scenes. I would like to ask Mr. Shahid Afridi that if he claims to be such a big advocate of islamic values, then why did he give his name for such a sinful act in the first place? Even he cant be that naive that a Pakistani / Indian movie will NOT CONTAIN any dance scenes.

Mr.hassan with due respect i would say that u r no one to judge any person as a muslim or a non muslim only on the basis of a comment.more over,true muslims do not declare their muslim brothers KAFIR over small acts….theek hai movies ect r not allowed in islam but is amal say ap kisi ko islam say kharij nahi kar saktay.ap ko kia pta Allah k nazdeek ap ka bhee koi amal napasandeeda ho.
Dear brother pls stop using islam as a negative tool instead give the same msg in a positive way otherwise ppl will never listn but only critisize.
Thanks for reading it patiently;sorry for any harsh words.
Allah sab par karam farmai.Ameen.

It was a great movie and I think there’s no harm in watching it with family. The dance by mathira was in the beginning of the movie, go 10 minutes later if you have objections to the ‘scenes’ and the movie is amazing. I mean people do go and watch the indian movies ‘with families’ in cinema then surely this film is far below the level of vulgaritiy in their movies. It is a splendid work by Humayun Saeed to revive the cinema and people should encourage it.