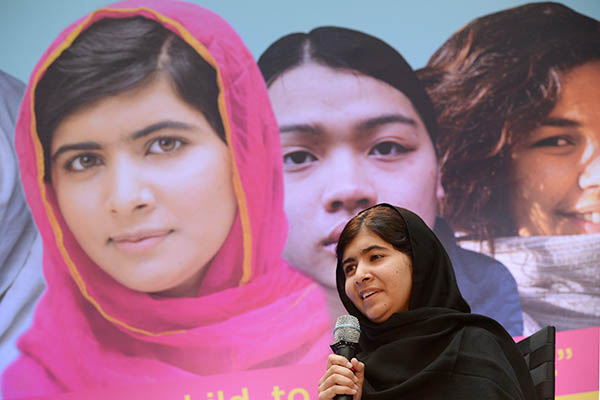 Friends and supporters of Malala Yousafzai in Pakistan voiced disappointment as she missed out on the Nobel Peace Prize Friday, but the Taliban said they were “delighted” at the news.

The 16-year-old was hotly tipped to win the Nobel after courageously fighting back from a Taliban attempt on her life to lead a high-profile international campaign for the right of all children to go to school. But the Nobel committee opted to award the Organisation for the Prohibition of Chemical Weapons (OPCW) for its work to rid the world of chemical arms.

Cricketer-turned-politician Imran Khan, head of the Pakistan Tehreek-e-Insaf party that rules Malala’s home province, said he was disappointed. “We are proud of this daughter of Pakistan who had to suffer trauma at such a young age … simply because she stood for the right of girls to education,” he said in a statement.

Pakistan’s former ambassador to the U.S., Sherry Rehman, voiced astonishment on Twitter, writing: “This award too is now loaded with political concerns.”

In Mingora, the main town of Swat Valley where Malala grew up and where on Oct. 9 last year a Taliban gunman tried to kill her, friends and former schoolmates were philosophical about the disappointment.

“If she did not win the Nobel Prize, it’s not a big deal,” said 17-year-old Muhammad Fahad, who studied with Malala. “Life is bigger than the Nobel Prize and her life is a major award for us. She will win many more awards.”

Her cousin Mehmoodul Hassan, 33, an administrator at the school where she studied, said: “Malala herself is an award for us, because she has come back to life from the edge of death.”

Following her shooting, the 16-year-old has written an autobiography, addressed the United Nations and set up the Malala Fund, which works to ensure girls around the world can attend school.

Tehreek-e-Taliban Pakistan (TTP) spokesman Shahidullah Shahid said the 16-year-old had done nothing to deserve the Nobel. “We are delighted that she didn’t get it. She did nothing big so it’s good that she didn’t get it,” Shahid said by telephone from an undisclosed location. “This award should be given to the real Muslims who are struggling for Islam. Malala is against Islam, she is secular.”

Such suspicion and even contempt for Malala is not uncommon in Pakistan—in contrast to her reception in the West, where she has been courted by politicians and feted by celebrities like Angelina Jolie and Madonna.

“Most people think this attack on Malala was a fake and a staged drama,” said Ibrar Khan, a political science student in Mingora. “Her father used this incident to go abroad and get an attractive job.”

College student Myra Khan accused Malala, whose father Ziauddin runs a school in Mingora, of abandoning her roots. “I will ask a very simple question, what has she done so far for girls education in Swat?” she said. “She has yet not established even a single institution, nor has established any fund to support education in Swat.”