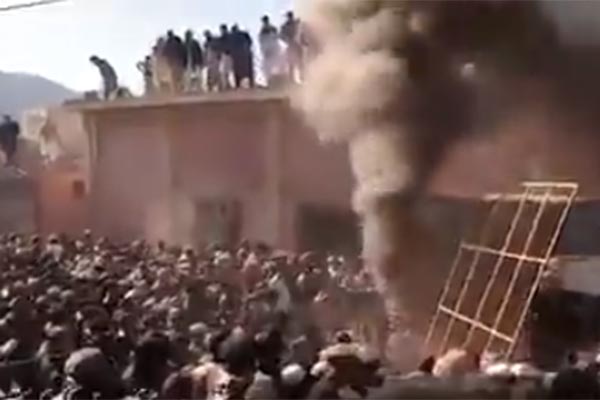 A mob of dozens on Wednesday set fire to, and demolished, several parts of a shrine dedicated to a Hindu saint in the Karak area of Khyber-Pakhtunkhwa province, prompting outrage and promises from the government to ensure the rights of minorities in Pakistan were protected.

Videos of the mob desecrating the shrine and chanting pro-Islam slogans went viral on social media. In the videos, smoke can be seen emitting from various parts of the shrine, as the crowds destroy the building using pickaxes and shovels.

Police have said that they reached the site and dispersed the mob as soon as the incident was reported to them. They said that cases had been registered against two local clerics and dozens of unidentified persons, adding that 31 people had already been taken into custody.

A senior police officer claimed the mob was incited into attacking the shrine by clerics, adding that the incident had started as a peaceful protest against the planned expansion of the shrine’s building. According to local clerics, the Hindu community that manages the shrine had sought to expand its building without proper authorization, which was “unacceptable.” They claimed the building had already been refurbished after a 2015 order of the Supreme Court of Pakistan, and there was no need for any further construction.

Eyewitnesses have claimed that the clerics led the mob to the shrine to force a halt to the construction. Several rioters, they said, had grown incensed by the rhetoric and set fire to the shrine, before using construction tools to destroy it.

This isn’t the first time that Shri Paramhans Ji Maharaj’s shrine has been targeted by bigoted mobs. In 1997, a group of Muslim fanatics destroyed it. Since its refurbishment in 2015, it has had police and guards stationed outside over security fears.

Amid mounting outrage, Human Rights Minister Shireen Mazari condemned the mob attack in a posting on Twitter. “Strongly condemn the burning of a Hindu temple by a mob in Karak, Khyber-Pakhtunkhwa,” she said. “KP government must ensure culprits brought to justice. The Ministry of Human Rights is also moving on this. We as a government have a responsibility to ensure safety and security of all our citizens and their places of worship,” she added.

Khyber-Pakhtunkhwa Chief Minister Mahmood Khan also took notice of the incident. In a statement, he directed police to take immediate action against the attackers and submit a progress report. He said everyone involved in the destruction of the shrine would be brought to justice, and vowed to ensure his government protected the lives and properties of minorities at all costs.

Similarly, special representative to the P.M. on Religious Harmony Tahir Ashrafi, urged the provincial government and Karak district administration to take immediate action against the people involved in the attack on the shrine. National Commission on Minorities Chairman Chela Ram Kewlani, too, strongly condemned the incident. “I cannot imagine that this type of incident can take place in the country where we have given our blood and lives for many generations. Those who have done this criminal act, cannot be called human beings,” he said. “This is indeed a black day for all of us. I request people from all religions to come forward and support the cause so that strict action should be taken against the people responsible for it,” he added.

Chief Justice of Pakistan Gulzar Ahmed on Thursday took suo motu notice of the shrine’s razing, with the registrar announcing the case would be heard on Jan. 5. Prior to the hearing, the top judge has directed the chairman of the minority rights commission, inspector-general of police and chief secretary of Khyber-Pakhtunkhwa to submit a report regarding the incident by Jan. 4.

According to a notification, the CJP took notice of the incident after meeting Pakistan Hindu Council chief patron Ramesh Kumar, who told media after the meeting that he trusted the judiciary to deliver justice in the case.