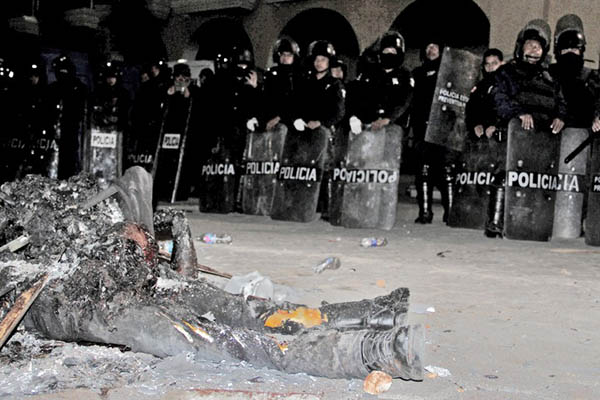 Rioters burned bodies of two pollsters they accused of being kidnappers.

Mexico’s National Human Rights Commission condemned on Wednesday the lynching of two brothers who were working as pollsters when a mob killed them and burned them while others took pictures.

The governmental organization demanded “justice for the victims and their families through a serious and professional investigation” that leads to the arrests of those responsible for the attack on Monday in Ajalpan, a town in central Puebla state.

The commission noted that it was the ninth lynching in that state this year, which highlights “the fragility of the rule of law in Puebla.”

The siblings were killed and burned by the crowd after people accused them of trying to kidnap children, even though the men denied the accusations and identified themselves as pollsters.

Before the lynching, the municipal police had taken the brothers to the police station to investigate the kidnapping accusations, but the mob entered the building and took both away. “We protected them until we couldn’t anymore. People revolted,” Ajalpan Mayor Gustavo Lara told Milenio television.

At least 25 people have been identified as participants in the killing from videos and photos taken by onlookers, Lara said. He said the town’s authorities called for help but state police took five hours to arrive.

The Puebla state public security chief, Jesus Rodriguez Almeida, denied that it took his forces so long to get there. Almeida said state police were called one hour after the attack began and that it took the officers 40 minutes to arrive.

An official in the state prosecutor’s office said several people are giving statements about what happened, including Ajalpan police officers and municipal workers.

Lynchings have occurred in other Mexican regions, including the southern region of Chiapas, where 11 people have been killed when people took justice into their own hands since 2012.