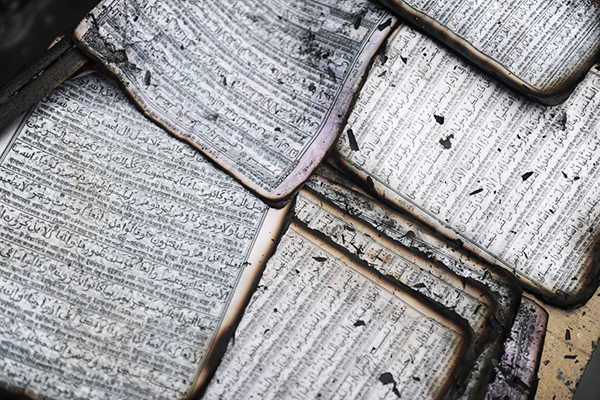 Ahmadi community says three members have been arrested over accusations of burning Qurans.

An angry mob in Punjab province torched a factory after one of its employees was accused of committing blasphemy, police officials said on Saturday.

Hundreds of people surrounded a chipboard factory in Jehlum city on Friday night and set the facility ablaze after reports surfaced that one employee had allegedly desecrated the Quran.

“The incident took place after we arrested the head of security at the factory, Qamar Ahmed Tahir, for complaints that he ordered the burning of Qurans,” said Adnan Malik, a senior police official in the area.

Blasphemy is a hugely sensitive issue in Pakistan, an Islamic republic of some 200 million, where even unproven allegations frequently stir mob violence and lynchings. Critics including European governments say the country’s blasphemy laws are often misused to settle personal scores.

According to police, another employee at the factory had reported that Tahir was overseeing the burning of Qurans in the facility’s boiler and intervened to stop the act. “We registered a blasphemy case against Tahir, who is Ahmadi by faith, and arrested him after confiscating the burnt material, which also included copies of the Quran,” Malik said.

Following the arrest, a mob reportedly descended on the factory, setting it alight. A spokesman for the local Ahmadi community said three of their members were arrested in the incident’s wake.

“Three members of our community have been arrested by police under the charges of blasphemy. There is an accusation of burning the pages of the Quran,” said Saleem Ud Din.

Ahmadis were declared non-Muslims by the Pakistani government in 1974. They are frequent victims of discrimination and violent assaults, but it is rare for suspects to be convicted for attacks against them. Eleven members of the sect were murdered for their faith in 2014 and authorities failed to apprehend any of the killers, a report said in April, highlighting growing intolerance toward the sect.

The picture of the burnt Quran was also used last year. Here is the link. http://globalnews.ca/news/537844/gallery-bangladesh-blasphemy-protests/

Ahmadies are Muslim and follow Quran and Prophet Muhammad Peace and Blessings be upon him.

These Pakistani Terrorist wanted the land of that factory for some time.