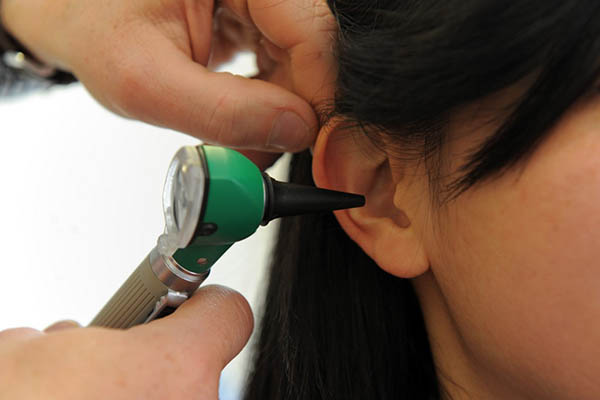 The app, which is awaiting regulatory approval, could help avoid doctor visits

A team at the University of Washington has invented a smartphone app that, when used with a paper funnel, is able to detect ear infections in children, helping parents decide whether a trip to the doctor is warranted.

The app, which was described in the journal Science Transnational Medicine on Wednesday, plays a sound akin to a bird chirp into a child’s ear canal via a simple funnel the parents put together. It plays for 1.2 seconds and then uses the phone’s mic to listen in: if fluids or pus have accumulated behind the eardrum, in the middle ear, the sound pattern of the returned echo will indicate an infection.

“The way to think about it is almost like a wine glass,” said Shyam Gollakota, head of the lab that developed the project. “And if you tap on the wine glass, you’re going to get a different sound depending on the level of liquid in the wine glass.”

It had a success rate of 85 percent when tested on around a hundred cases, and, according to Gollakota, is more accurate than a visual inspection by a doctor. If an infection is detected, parents will need to go to a doctor anyway for confirmation and to get a prescription.

Gollakota likened its utility to that of a thermometer, which helps people decide whether a visit to a doctor is appropriate.

The ear infection app is just one of several ideas being developed by the lab at the intersection of mobile technology and health. The goal is to resolve some of the biggest health issues that people face today at lower costs.

Gollakota’s team has also built another application to detect sleep apnea, and another that warns the relatives or friends of a person taking opioids if they appear to be overdosing. He hopes to obtain regulatory approval for the ear infection app by the end of the year and have it available in the market by early 2020.