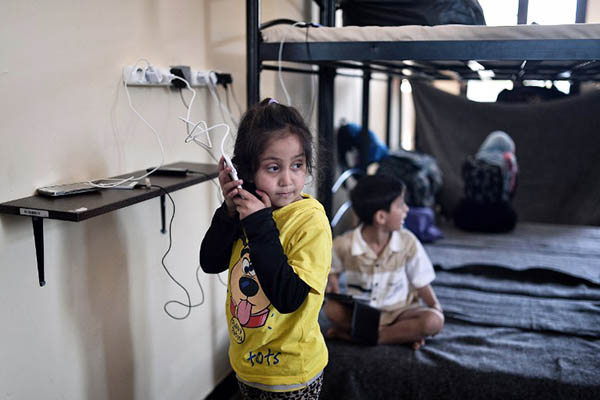 “Daddy, where are you now? In Turkey or Sweden?” a Syrian girl asks her father in her first voice message to him since he joined hundreds of thousands fleeing the war. The recording, sent by smartphone, is one of many messages between Syrians that Jordanian photographer Tanya Habjouqa has compiled into her short film Syria Via WhatsApp.

The film is showing at an exhibition in Dubai focused on the plight of refugees and migrants, including Syrians, as Europe struggles with its biggest migration crisis since World War II. The show, “If I leave, where will I go?,” also displays images by Syrian director Omar Imam and late French-Moroccan photographer Leila Alaoui.

Habjouqa’s film features voice recordings and images exchanged by Syrian family members separated by a five-year conflict that has killed more than 270,000 people and pushed nearly five million into exile. The messages are sometimes sentimental and full of longing, but also include everyday questions: “How’s the weather?”, “What did you eat today?”

A father tells his daughter he has sent her flowers and a kiss by way of WhatsApp emojis, while one girl asks her father for “a white dress, as well as grey and pink.”

One refugee in Europe tells his wife: “I want to get you out of the Arab world where there is only humiliation. I swear I will bring you here to live the best life… you’ll live with dignity.”

“I miss you a lot,” he says. “I miss sitting with you and making you coffee in the morning.”

The film also shows selfies sent by those who have managed to reach Europe.

The messages are often the first contact between family members after “long periods of time when they don’t have Internet and there’s no word” from those who departed, says Habjouqa. “For most of the mothers and children, the most terrifying part is the… silence” from the minute migrants leave Turkey towards Greece.

In 2015, more than a million migrants entered Europe, about half of them Syrians fleeing war, with Germany shouldering most of the burden. Of these, around 850,000 people made the dangerous Aegean Sea crossing to Greece from Turkey—a route that also claimed more than 300 lives.

“Sometimes it takes quite a while before they [migrants] can send a message that they’re okay,” says Habjouqa. “It was through these WhatsApp messages that for the first time… [I] felt the story and understood fully what was happening. I understood on a deeper level what this migration meant.”

Imam’s black and white surrealistic images at the same exhibition further explore how Syrians have been affected by the conflict.

In one photograph, a woman sits at a neatly set table as a waiter serves her a plate of grass picked from a nearby field.

A caption under the image reads: “There was nothing but grass. I was unable to swallow it but forced myself to do this in front of my children to convince them to accept it as food.”

At least 250,000 Syrian children are living under siege across Syria, with many forced to eat animal feed or grass to survive, Save the Children said last month.

Syria’s hunger crisis triggered global outrage when images of emaciated children emerged earlier this year from the besieged town of Madaya near Damascus. Residents said they had been surviving on soup made from boiled grass.

In a short film, Imam portrays a little girl left with nothing but a photograph of herself with her parents. “I wanted to portray real people trying to survive and overcome the mental problems,” said Imam, who fled Syria in 2012. “My characters are not the refugees you see in the news,” he told AFP via email, after he was denied a visa to attend the Dubai exhibition.

The show also pays tribute to photographer Leila Alaoui, who was among dozens killed in a January attack claimed by Al Qaeda on a hotel in Burkina Faso.

In her video installation Crossings, she shows migrants speaking about making the perilous journey from Sub-Saharan Africa to Europe. One woman says she left her country because there was no work.

“I have four kids, and grandsons too. I abandoned them over there with my mother and I hit the road.” One man says he was left with no option as Muslims and Christians fought in his country. Another migrant is more desperate. “I feel like going back. But where do I go to if I go back? I feel like staying here. But where will I stay if I stay here? I feel like dying.”

Syria Via WhatsApp from Capture Productions on Vimeo.