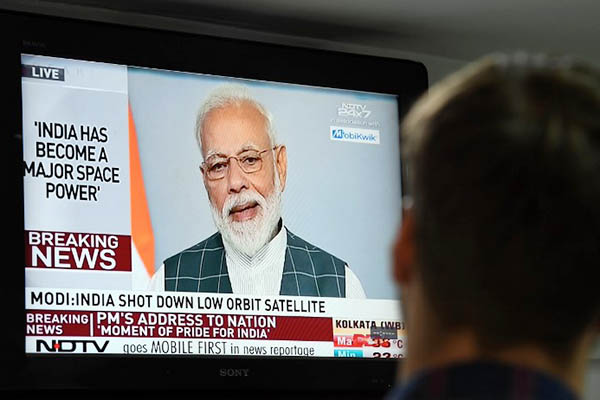 India said on Wednesday it destroyed a low-orbiting satellite in a missile test that proved the nation was among the world’s most advanced space powers.

In a rare address to the nation just weeks out from a national election, Prime Minister Narendra Modi said India had joined the United States, Russia and China in accomplishing the feat.

A missile fired from a testing facility in Odisha, eastern India, downed the satellite at around 300 kilometers in “a difficult operation” that lasted around three minutes, Modi said. “This is a proud moment for India,” the prime minister added, in his first televised national address since late 2016. “India has registered its name in the list of space superpowers. Until now, only three countries had achieved this feat.”

It comes a month after Indian and Pakistani fighter jets engaged in a dogfight over the disputed border in Kashmir—a serious military escalation between the nuclear-armed rivals. An Indian jet was shot down and a pilot captured by Pakistan, which had launched retaliatory air raids after Indian planes bombed Pakistani territory for the first time in decades.

Modi said the anti-satellite missile test was peaceful, and not designed to create “an atmosphere of war.” He added: “I want to assure the world community that the new capability is not against anyone. This is to secure and defend… fast-growing India.”

But analysts said the test would not go unnoticed in China and Pakistan, India’s chief rivals in the nuclear-armed region, and could be interpreted as a show of New Delhi’s advancing military capabilities. “This is less about shooting down satellites and more about proving high-altitude ‘hit-to-kill’ proficiency, which is the core competency required to get good at a range of things—including defense against nuclear-capable ballistic missiles,” said Ankit Panda, of the Federation of American Scientists. “This is how the message is going to be perceived in Islamabad.”

A spokesman for Pakistan’s foreign ministry said countries that had “strongly condemned” the demonstration of similar technologies in the past should work towards preventing the militarization of space. “Boasting of such capabilities is reminiscent of Don Quixote’s tilting against windmills,” the spokesman said.

The United States and the former Soviet Union carried out their first successful anti-satellite missile tests in 1985, and China in 2007. All are now said to be working on so-called Star Wars laser weapons to destroy satellites.

With satellites increasingly important because of their intelligence gathering role—and major nations seeking to gain a foothold in space—the United States in 2014 rejected a Russian-Chinese proposal for a treaty to ban weapons in space, saying it was “fundamentally flawed” because of the lack of weapons verification measures.

India’s foreign ministry said the country “has no intention of entering into an arms race in outer space.” It said: “We have always maintained that space must be used only for peaceful purposes. At the same time, the government is committed to ensuring the country’s national security interests and is alert to threats from emerging technologies.”

Modi said the test did not violate any international treaties and was for the betterment and safety of India’s 1.3 billion people.

The announcement comes ahead of a national election in which Modi—whose Hindu nationalist party stormed to power in 2014—is seeking a second term in office. Voting starts April 11 and will last nearly six weeks, with close to 900 million Indians eligible to vote in the world’s largest election.

Under election laws in force, the government is forbidden from announcing new policies or other major developments that could benefit the ruling party.

“The timing and the manner of the announcement, with elections around the corner, will certainly lead to speculation,” said Dhruva Jaishankar, Delhi-based fellow in foreign policy with Brookings India.

Finance Minister Arun Jaitley defended the announcement, saying for “a deterrent of this kind there is no better than the prime minister to inform the world.”

India has made giant strides in its space journey in recent years. It launched a record 104 satellites in a single mission in 2017, and has also built a reputation for low-cost space exploration and science missions.

Theatrics apart, this is yet another significant achievement of DRDO & ISRO. The capability was there for some years , but it now got shrouded in controversy on account of the timing of the demonstration which indeed was the Prime Minister’s prerogative. In a democracy where competitive populism has come to stay, optics are bound to play a bigger role.

It is frustating to note that while india is doing well in space technology it is backward in Arms technology
We continue to be the worlds largest importers of
Arms and armaments.The focus should be on self reliance in defence production.if required with technological support and defence collaboration agreements with USA and Israel!