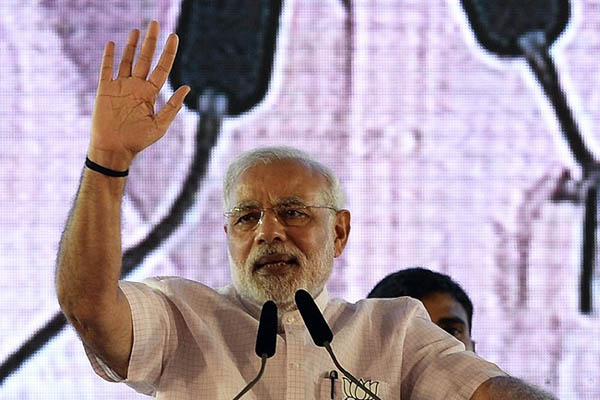 India’s Prime Minister Narendra Modi beefed up his government on Sunday, appointing 21 new ministers in a bid to speed up promised economic reforms after storming to power five months ago.

Four new lawmakers were sworn into the 27-strong cabinet during a ceremony at the presidential palace in New Delhi, while the number of junior ministers in the right-wing government jumped to 39.

“This expansion was on the cards from some time. It has emerged as a good blend of youth and experience,” a spokesman for the ruling party told the NDTV network. “Regional representation has been kept in mind,” Aman Sinha added.

Newcomer Manohar Parrikar, a regional leader of Modi’s Bharatiya Janata Party (BJP), was tipped to become the new defense minister when all of the portfolios were expected to be formally announced late Sunday or Monday.

Parrikar’s likely appointment would ease the burden on Arun Jaitley, who has been juggling both the key defense and finance ministries while battling ill health. The move would allow Jaitley to focus on the mammoth task of reforming and reviving the flagging economy, which Modi pledged during his landslide election victory in May.

“[The] economy was, and is, in a challenging situation and one of the primary challenges is to restore confidence in the economy,” Jaitley said at an economic forum in New Delhi before the swearing in.

The new ministers were drawn almost entirely from the ranks of the Hindu nationalist BJP and include controversial M.P. Giriraj Singh and Jayant Sinha, the Harvard-educated son of a former BJP finance minister.

Singh, from eastern Bihar state, came under fire during the election campaign for saying “those who oppose Narendra Modi should go to Pakistan.”

Mukhtar Abbas Naqvi, a popular Muslim face in the party, was appointed a junior minister, along with only one additional woman, taking the total number in government to eight.

After his election victory, Modi had opted for a slimmer government than the previous administration, which he said would help speed up decision-making and slash India’s notorious bureaucracy. But analysts say some ministers and bureaucrats, handling multiple portfolios, have felt overloaded.

The government is seeking to boost the economy, which expanded last year by a near-decade low of 4.7 percent—but the country needs double-digit expansion to create enough jobs to employ a ballooning youth population, economists say.

Although it has introduced some reforms, the government has so far steered clear of “big bang” initiatives that economists say are needed to boost investment and manufacturing.

Jaitley said Sunday he would push through changes in parliament to India’s complex process of buying land for business use. Land acquisition is a politically charged issue, which has delayed many projects sometimes for years, including construction of a $12-billion plant by South Korean steel giant POSCO in the country’s east.

Jaitley also said talks were well under way between India’s states and other stakeholders on revamping and streamlining the tax system, including introducing a national goods and services tax.

Modi wants a strong ministerial team in place ahead of parliament’s winter session, which begins on Nov. 22. The nationalist leader is also eyeing state elections next year, with Sunday’s boosted government including plenty of regional leaders.