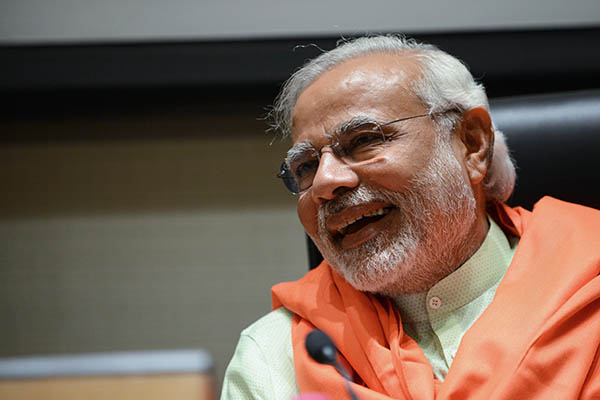 Official election results due on Friday but exit polls predict the BJP and its allies will defeat the Congress party.

India’s triumphant rightwing opposition said Tuesday it was headed for a decisive majority in the world’s biggest election after exit polls showed its hardline leader Narendra Modi closing in on victory.

Stock markets surged to record highs on hopes of a business-friendly government under Modi after a decade of rule by a left-leaning coalition, while U.S. President Barack Obama said he looked forward to working with the new administration in New Delhi.

“Modi at Delhi Gate” said a headline in the Mail Today, while the Hindustan Times read simply “Exit Polls: Enter Modi” after surveys released after voting ended Monday pointed to a big win. All forecasts showed Modi’s Bharatiya Janata Party (BJP) and its allies trouncing the Congress party, which has been in power for a decade, and most indicated they would seal a narrow majority.

Official results are due on Friday, with some still cautioning against over-confidence in a BJP victory given notorious forecasting errors at the last two general elections.

Modi was keeping a low profile, but senior BJP figures were bullish. “These elections have been fought on a hope that the country will get a good, stable government,” V. K. Singh, a former army chief of staff who is now a senior BJP leader, told reporters at party headquarters. “My personal view is that we will get around 300 seats” of the 543 seats in Parliament, said Modi’s chief lieutenant Amit Shah.

The BJP is open to working with any other party that wants “to work for the nation,” Shah told the Headlines Today network.

A new exit poll by Times Now channel late Tuesday forecast the BJP and allies would reach 292 seats, comfortably crossing the threshold of 272 needed to form a majority coalition. The Congress party put on a brave face, calling pollsters “doomsayers.”

Reacting to the end of five weeks of voting that saw a record turnout of 551 million people, U.S. President Barack Obama said India had “set an example for the world.” He said Washington looked forward “to working closely with India’s next administration to make the coming years equally transformative.”

Modi’s election would present a headache for the U.S., which refused to deal with him for years in the aftermath of religious riots in the state of Gujarat in 2002 shortly after he became its chief minister. More than 1,000 people, mostly Muslims, were killed in the violence, which critics say Modi did little to stop, even though a court-appointed investigation team cleared him of any wrongdoing.

Washington only ended its boycott of Modi in February when Nancy Powell, the outgoing U.S. ambassador to India, met him for talks in Gujarat. European countries also refused to deal with him for years in the wake of the 2002 riots, for which Modi has refused to apologize.

Foreign and domestic investors have few misgivings about his past, however, and appeared in no mood to heed the warnings about unreliable pollsters. “The expectation is [the BJP alliance] will get to form the government comfortably and even if they need more allies they will not present a stumbling block for reforms,” said Harendra Kumar, head of Mumbai-based brokerage Elara capital.

The benchmark Bombay Stock Exchange index, known as the Sensex, hit a new record high and has now gained around 22 percent since the BJP chose Modi as its prime ministerial candidate in September. New data on Monday showed industrial production shrank in March for the fifth time in six months, underlining the scale of the challenge for the next government in reviving growth.

Modi has largely steered clear of Hindu nationalist rhetoric on the campaign trail, promising to focus on development by rolling out the red carpet to companies and restore badly battered business confidence.

While a victory by the BJP was expected, the predicted scale of defeat for Congress was still striking, with exit polls showing support for the party, which has ruled India for most of the post-independence era, at an historic low.

Party leaders insisted Friday’s results would surprise the pollsters and hand the Congress-led alliance a third term in power. They have begun rallying around Rahul Gandhi, scion of the Nehru-Gandhi political dynasty, who led his first national election campaign—widely panned as lackluster and uninspiring.

Congress spokesman Shakeel Ahmed said party president Sonia Gandhi, Rahul’s mother, as well as local Congress leaders had fought the election together and shared responsibility for the outcome. “It is all collective,” he said.