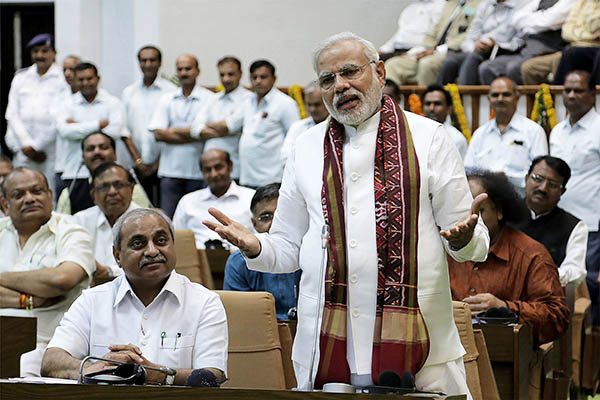 Invitation has been seen as positive sign for Pak-Indo ties even though Pakistan’s premier has yet to respond to offer.

Indian prime minister-elect Narendra Modi has invited Prime Minister Nawaz Sharif to his swearing-in next Monday in a bold diplomatic statement that he intends to improve strained relations.

A government official said Wednesday invitations to the ceremony had been sent to all heads of government from the South Asian Association for Regional Cooperation (SAARC), which includes Pakistan. “These communications have just gone off in the afternoon and we are now awaiting a response,” said foreign ministry spokesman Syed Akbaruddin.

The invitation signals Modi’s intention to tackle India’s most troubled bilateral relationship at a time when Sharif is also keen on talks, analysts say. “It’s a very important gesture,” said Manoj Joshi, a fellow at the Observer Research Foundation, a New Delhi-based think-tank. “It definitely shows Modi’s intentions to focus on immediate neighbors and it’s a realistic signal: realism in the sense that unless you have good relations with neighbors you can hardly focus beyond,” he said.

Modi will take the oath as prime minister 10 days after his rightwing Hindu nationalist BJP scored a landslide victory, securing the first majority by a single party in 30 years. The hardline leader was expected to usher in a more muscular foreign policy, insisting on the campaign trail other countries would respect India only if it showed strong political leadership.

Sharif, who is himself a center-right leader, has hailed Modi’s “impressive victory” and many diplomats hope the two men can thaw ties between the nuclear-armed neighbors. Sharif has cited his working relationship with Atal Bihari Vajpayee, India’s last prime minister under the BJP, as a reason for optimism, according to diplomatic sources.

In 1999, during Sharif’s second term in power, Vajpayee rode a bus to Lahore to sign a peace accord and raise hopes of normalized ties. But three months later, the neighbors embarked on the Kargil conflict in the Himalayan region of Kashmir that almost became a full-fledged war. India and Pakistan have fought three wars since independence in 1947 and bilateral ties broke down after 2008 attacks by Pakistani gunmen on India’s commercial hub Mumbai in which 166 people were killed.

Relations warmed slightly toward the end of the term of outgoing Prime Minister Manmohan Singh, but still remain frosty amid mutual distrust and regular skirmishes along their disputed Kashmir border. Singh’s Congress party, which crashed to its worst-ever defeat in the elections, brushed aside political hostility and welcomed the invitation to SAARC leaders.

“It’s the prerogative of the prime minister who he wants to invite,” Congress spokesman Abhishek Manu Singhvi told a news conference. “We hope this positive initiative will translate into something substantive.”

Modi warned during campaigning that talks could not be held with Pakistan until all violence ceased. Key issues remain the disputed Kashmir region as well as Islamist militancy inside India, which New Delhi frequently accuses Pakistan of backing. While Pakistan’s civilian leaders and business community favor closer ties, many ordinary Pakistanis revile Modi. He is tainted by 2002 religious riots in his home state of Gujarat that killed 1,000 people, mostly Muslims.

Pakistan’s Army is also said by analysts to be wary of closer ties and could act as a brake on any peacemaking attempts.

Talat Masood, a political analyst based in Islamabad, hailed the Indian initiative as a “great gesture” that Pakistan must reciprocate even if the Army thinks otherwise. “There’s nothing to lose in reciprocating it and attending the ceremony. This will give the message Pakistan is genuine about improving relations with India,” said Masood, also a retired general.