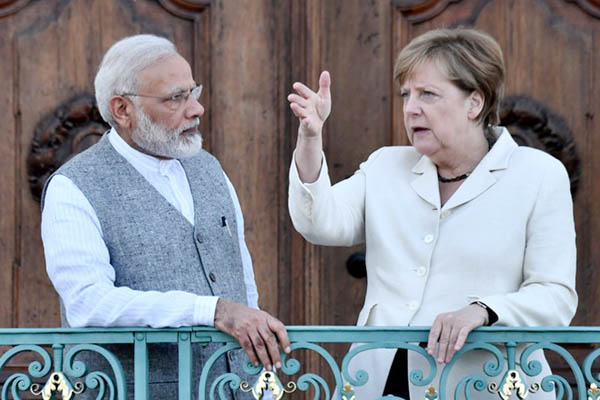 Indian premier will also travel to Spain, France and Russia during five-day trip

Merkel has long cultivated strategic relations with the world’s biggest democracy and rival Asian power to China, whose Prime Minister Li Keqiang will also visit Berlin this week. Merkel often stresses that Germany and the European Union must compete with the new emerging economic giants, and on Sunday she said that Germany could no longer completely depend on traditional allies the United States and Britain in the age of President Donald Trump and Brexit.

Modi and Merkel will address stalled talks on an E.U.-Indian free trade and investment deal at a time when New Delhi is eyeing nervously Beijing’s Silk Road trade and infrastructure initiatives across Eurasia. The two leaders—who will meet again at a G20 summit in the German city of Hamburg in July—are also expected to discuss the growing military reach of China across the contested South China Sea and into the Indian Ocean.

Modi—before embarking on his tour, which also takes him to Spain, France and Russia—wrote on Facebook in a post contrasting India with China that “India and Germany are large democracies, major economies and important players in regional and global affairs. Our strategic partnership is based on democratic values and commitment to an open, inclusive and rules-based global order.”

A German foreign ministry spokesman, Martin Schaefer, stressed that India enjoys rapid economic growth and development and, with a current population of over 1.3 billion, “will soon be the most populous country on Earth.”

“Everything that happens in India—politically, economically and socially—has, because of the country’s size and importance, a direct impact on the whole world, including us.”

Having had a dinner Monday at the Schloss Meseberg retreat outside Berlin, Modi and Merkel on Tuesday lead a joint cabinet meeting grouping foreign, economy, environment and other ministers.

Germany is India’s largest trading partner in the E.U., and a top source of foreign direct investment. More than 1,600 German companies with over 400,000 employees operate on the subcontinent. New Delhi has said several agreements will be signed on trade, defense cooperation, and science and technology, at their fourth intergovernmental consultations—a format Germany has only with a few countries, which include China, Israel and France.

The two leaders will then attend an India-German Business Summit, where German CEOs may announce investments but also reiterate complaints about barriers their businesses face in India, including tariffs, red tape and poor infrastructure. Two-way trade has more than tripled over the past decade to over 17 billion euros ($19 billion) in 2016, of which German exports make up almost 10 billion euros.