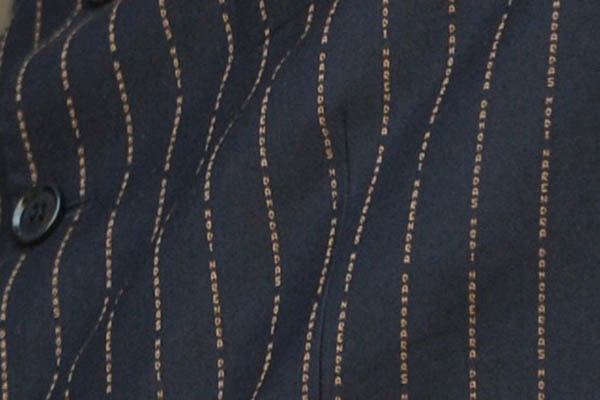 Indian prime minister’s decision to wear a suit that had his name printed all over it has gone viral.

Narendra Modi’s daring fashion choices have won plaudits in the past, but the Indian leader’s decision to wear a suit with his own name printed all over it sparked a barrage of mockery on social media.

The sartorial misstep involved a pin-striped suit Modi wore for his one-on-one meeting with visiting U.S. President Barack Obama on Sunday. When images of the prime minister were enlarged, it became clear that the subtle pink stripes were made up of the words “Narendra Damodardas Modi” printed in tiny letters on the tailored wool suit.

Close-up images of the suit have gone viral, triggering sardonic responses from social media users under the hashtag #ModiSuit.

“Maybe he was afraid that someone would steal his clothes?” Suprateek Chatterjee tweeted, calling it a “vanity-striped suit.” Other critics were more blunt. “WTF were his designers thinking,” tweeted Vinay.

The suit—Modi’s second outfit of the day after he greeted the Obamas at the airport wearing a beige kurta and saffron shawl—clearly did not offend the U.S. president. Obama complimented Modi on his style during his toast at dinner that evening, and said he had considered wearing a kurta himself.

Modi is not the first world leader to wear his name on his sleeve. In 2011 former Egyptian leader Hosni Mubarak was photographed wearing a bespoke suit with his name printed into pinstripes.